Polyoxometalate crystals grown into microtubes of controlled size and shape

Inorganic crystals dropped into water can be grown into long ’microtubes’ of controlled size and shape, chemists in the UK have discovered. The team found how to control the growth, forming a series of shapes including cubes and crosses - and even making junctions to join tubes together. The findings will have a wide impact, especially on microfluidic device fabrication, the team predict.

’This is an entirely new phenomenon,’ Cronin adds. ’It is fundamentally interesting that you can take what you think are stable crystalline materials and do this with them.’

The tubes grow fast enough to be watched in real time

Osmotic pressure is behind the tubes’ growth, Cronin adds. The POM and cation form a membrane around the crystal, and gradually take up water from the solution until the membrane suddenly ruptures, jetting out POM-rich solvent. This material precipitates to form the start of the tube, down which polyanions continue to flow, ensuring that the tube continues to grow.

Being able to manipulate the direction of microtube growth, by applying and varying an electric field, is where the fun comes in. Cronin placed lots of electrodes - controlled via homemade knobs - around the edges of the microscope slide where a tube is growing. The team describe this device as being like the etch-a-sketch child’s toy. ’We have been drawing all sorts of things such as crosses and cubes,’ exclaims Cronin. 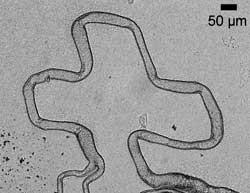 The tubes can be grown into a variety of shapes

The team can also watch tubes colliding to form branched junctions. ’When two tubes come together, they fuse, and there is enough pressure to cause a growth at right angles to the fusing,’ Cronin explains. This is the least understood part of the whole process, and currently the team are trying to use direction control to very slowly bring two tubes together and watch the process in more detail.

However, the team have already begun to investigate potential applications. ’We can flow solvent through these tubes, so you can imagine using the tubes as microfluidic conduits for device fabrication,’ says Cronin.

POMs are electronically very active - and are used for many purposes, including catalysis. ’The fact you can fabricate such electronically interesting materials so quickly, over such a large area, is where the interest lies,’ explains Cronin. The fact that the system works for virtually any type of POM - provided it has the right solubility - further expands its potential remit. ’We took any old POM out the lab and it did the same thing - which was pretty incredible,’ he says.

As well as further studying the process of junction formation, the team have already used the tubes to run catalytic reactions, and plan to publish their results shortly. They are also hoping to encourage other scientists to join the field by publishing on their research group homepage instructions on how to make these tubes - which they claim competent scientists should be able to master in about a week.

Younan Xia, an expert in nanostructured materials from the Washington University in St Louis, US, says that ’this is interesting research, and their approach is pretty novel.’ But Xia adds that further research is needed, as the mechanism behind the phenomenon isn’t very clear. ’While they propose osmotic pressure to induce this process, I don’t think it’s clear how materials are transferred to the tip of the tube so that it continues to grow.’