A new type of purification membrane that could simultaneously produce fresh water for drinking or agriculture and absorb specific contaminants from the brine left behind has been demonstrated by researchers in the US. The team believes the technology could potentially help to extract potable water from difficult sources without complex, multi-step processes, as well as extracting valuable minerals from water. 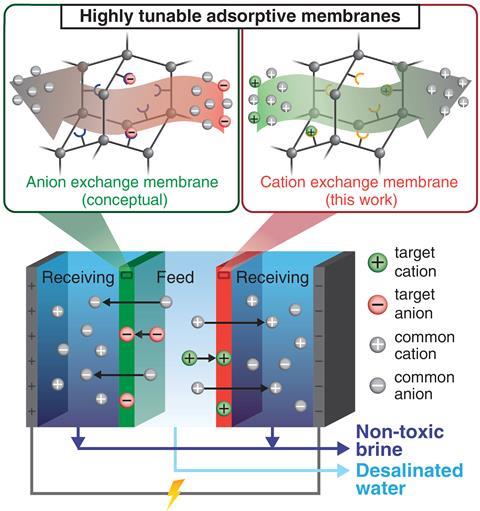 As water flows through the cell, the potential drives ions across membranes tuned to catch specific target ions, while the unwanted salt passes through leaving clean water behind

As demand for water grows to meet the needs of an ever-expanding and developing population, so too does the demand for technology to extract fresh water from unconventional sources such as produced water (water released during oil and gas extraction) and seawater. The industry standard treatment is reverse osmosis: water is forced through a dense membrane through which ions – surrounded by a shell of solvent water molecules – do not fit. Electrodialysis, in which a potential difference applied across the water draws out ions through selectively-permeable membranes, is a popular alternative. Both have two drawbacks: first, neutral contaminants are not removed, making further purification necessary. Secondly, what is removed is a mixture of ions that, depending on the original water source, may be valuable, toxic, or both: ‘If you have a small amount of, say, mercury, all the brine has to be treated as mercury-containing waste,’ explains Adam Uliana of University of California, Berkeley.

Uliana and colleagues modified the standard cation-permeable membranes used for electrodialysis (a sulfonated polysulfone matrix) by studding them with funtionalised porous aromatic frameworks built from organic nodes and aromatic linkers. Incorporating functional groups into the linkers makes frameworks highly selective for one specific ion: ‘For example, thiols are selective for mercury,’ explains Uliana. As the water passes through the membranes, the frameworks grab their target ions, allowing the remainder to pass through into the brine. This could potentially allow materials to be removed from mixed brines, where they are worthless or toxic, and purified to become valuable to industry.

The researchers also tested their membrane’s efficiency at removing neutral contaminants. They found that, if suitably functionalised, it could capture boric acid – a toxic chemical found in pesticides – purely by diffusion. They believe it should be possible to functionalise an anion-permeable membrane as well. This could potentially allow purification of water in a single step. Moreover, adding these pores appears, based on preliminary work, to have increased the desalination efficiency of the polysulfone membranes, says Uliana.

Chemical engineer Ryan Lively of the Georgia Institute of Technology in Atlanta, US, believes the researchers’ ‘ion-capture electrodialysis’ technique may prove especially useful for treating water from unconventional sources: ‘Seawater reverse osmosis plants are highly optimised and work really, really well for saltwater. But as you move towards surface waters, brackish waters, produced waters and other non-conventional sources, you run into more and more issues that these membranes can’t address,’ he says. ‘What I like about this approach is that it adds flexibility via this ion-capture modality that’s built into the desalination part that previously wasn’t there.’