Highly sensitive explosives could become safer and greener by exploiting newly characterised ionic polymer structures, say chemists in the US. Such materials could replace explosives based on toxic heavy metals like lead and mercury salts.

Sensitive materials are routinely used as primary explosives in detonators to set off larger amounts of less sensitive high explosives in mining or military applications. The challenge is to make them stable enough to be handled safely in the field, but also sensitive enough to detonate reliably, packing as much energetic punch as possible. ’It’s a very fine balance,’ says Louisa Hope-Weeks of Texas Tech University (TTU) in Lubbock, who led the research.

’We wanted to make an optically activated material,’ explains Hope-Weeks, ’so that if, for example, a bomb squad want to blow up a car they suspect has a terrorist device inside, they would have something they could remotely place under the car and then activate it with a laser, rather than someone having to go in there and wire it up.’

While none of the materials the group has so far made has reached this goal, by making and solving the x-ray crystal structures of three materials based on metal hydrazine polymers, the team can relate the materials’ properties to their structures.

However, this kind of research obviously comes with significant hazards. These compounds are the same ones that caused a serious explosion in Hope-Weeks’s lab in 2010, seriously injuring Preston Brown, one of the contributors on this paper. ’There was a lot learned from that accident, both from the students’ point of view and my own,’ comments Hope-Weeks. ’I’ve changed the way I manage my whole lab, and TTU has responded across the board.’

All this made for some nerve-racking moments in the crystallography lab. ’In the case of nickel hydrazine perchlorate, which we knew was very sensitive, we did need to cut a crystal to get one the right size,’ Hope-Weeks says. ’I did that myself.’ However, she points out that no particularly special crystallographic equipment was needed, since the size of crystals used - had they exploded - would not have caused significant damage to the diffractometer.

Thomas Klap?tke, an energetic materials expert from the University of Munich in Germany, is impressed by the team’s efforts at crystallising and characterising the materials. ’This is not easy, as these kinds of polymers often tend to crash out of solution as powders,’ he says. 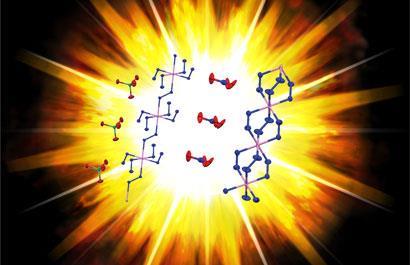 The knowledge Hope-Weeks has gained should help her understand, tune and refine the stability and energetic properties of related compounds. For example, in nickel hydrazine nitrate - which is already used as a primary explosive, but whose crystal structure was unknown - each metal atom is linked to the next by three bridging hydrazine ligands. However, in nickel hydrazine perchlorate, only one hydrazine bridges between metal centres, with four more hydrazines coordinated to each nickel. This means the whole polymer is less strongly held together, making it significantly more sensitive. And when it does explode it can release more energy, because of the potential to produce more nitrogen gas per metal atom and form more thermodynamically stable products like nickel chloride rather than nickel metal. Changing the metal to cobalt produced a material with the same structure, but that was significantly less sensitive

One of the advantages of this class of materials is their tunability, explains Hope-Weeks. ’We can try different metals, different anions and other ligands,’ she says, ’which might allow us to tweak the properties just enough.’

Klap?tke agrees that there are many options to explore. ’These ionic polymers are very interesting, especially because they are not hygroscopic and non-toxic,’ he points out. ’This gives them a long shelf-life because they don’t react with water, which might alter their sensitivity and make them unreliable.’