Cancer cells need more iron than normal body cells to sustain their abnormally rapid growth. Prem Ponka from McGill University, Canada, and Des Richardson’s group at the University of Sydney, Australia, investigated a range of organic molecules that can bind iron in a tight chelate complex and thus deplete tumours of this vital element. While many such compounds show some activity against tumour cells, the researchers identified one particularly potent substance, Dp44mT (di-2-pyridylketone-4,4,-dimethyl-3-thiosemicarbazone). 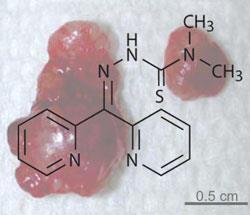 Tumour with (right) and without Dp44mT

Studying the activity of this substance in vivo, in human tumours implanted into mice (xenografts), the researchers found that Dp44mT has promising anti-tumour activity at concentrations so low it does not cause side-effects in the rest of the body. Surprisingly, the researchers found that at the lowest active doses, even the tumour tissue wasn’t significantly depleted of iron.

Thus, the authors suggest two other mechanisms which might account for the remarkable anti-tumour activity of this compound. One direct way in which it might harm the tumour cells is by entering the cell and forming iron chelate complexes that are cytotoxic due to the redox chemistry they engage in. Additionally, the researchers suspect that the presence of the chelator leads to the upregulation of a tumour-suppressor gene known as Ndrg1 (N-myc downstream regulated gene-1).

The only worrying side effect the researchers observed, after administration of higher doses, were heart problems. The researchers also attribute these effects to the redox chemistry of the chelate complex. However, they are confident that additional chelators or scavengers can help control these effects.

The most promising aspect of their findings, the researchers say, is the observation that Dp44mT is active against a broad range of human tumours including those that have shown resistance towards conventional chemotherapy. Charareh Pourzand from the University of Bath, UK, agrees. The work ’identifies a powerful tool to overcome the phenomenon of multidrug resistance associated with chemotherapy of cancer cells,’ Pourzand told Chemistry World.