Researchers in the US and the UK have found microbes in the Antarctic that appear to have survived in isolation, without sunlight or new supplies of nutrients, for more than a million years. The discovery suggests that similar microbes could have survived the supposed ’snowball Earth’ periods, when our planet may have been covered by ice, or could even exist elsewhere in the solar system.

Most organisms familiar to us rely in some fashion on energy generated by photosynthesis, a chemical reaction that uses carbon dioxide, water and sunlight. But not all organisms need photosynthesis: on the dark ocean floor some microbes survive on the oxidation of sulphides, for example, and some bacteria are known to survive inside rocks purely by reacting carbon dioxide with hydrogen. 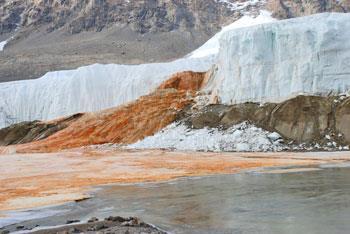 Now, Jill Mikucki of Harvard University and others have found one of the most isolated forms of life ever discovered. They have taken samples from Blood Falls, a reddish outlet of fluid on an edge of the Taylor Glacier in Antarctica. The fluid comes from a pocket of very salty ancient seawater that was trapped in the glacier between 1.5 and 4 million years ago. DNA analysis showed that it contained several different types of microbe, while chemical analysis revealed a crucial absence of oxygen, the characteristic by-product of photosynthesis.

Mikucki’s group found large concentrations of iron in the samples, and they think this iron must produce the red colour of Blood Falls as a result of its oxidation to rust. More interestingly, however, they think this iron helps the microbes to metabolise sulphate (SO4), which was also present, to provide energy. Some organisms generate energy by reducing sulphate to sulphide (S), but because there was no trace of sulphide in the sample the researchers believe the sulphate must be reduced instead to sulphite (SO3) in the presence of iron from the bedrock.

The researchers suggest that microbes relying on a similar ’sulphur cycle’ could have existed at periods in the Earth’s history when some paleoclimatologists think most of the surface was covered in ice and there would have been little photosynthesis. Moreover, they say the trapped fluid deposit at Blood Falls could function as a laboratory for the study of possible life in other harsh environments, including Mars’s frozen icecaps and Jupiter’s icy moon, Europa.

Bo Barker Jorgenson, a microbial ecologist at the Max-Planck Institute for Marine Microbiology in Bremen, Germany, thinks the study is ’very interesting’ but notes that there are possibly more isolated forms of life, such as bacteria that are known to have lived on deep seabeds for over 100 million years. ’Whether [the study] sheds new light on the potential for microbial life during snowball Earth periods, I am not so sure,’ he adds.