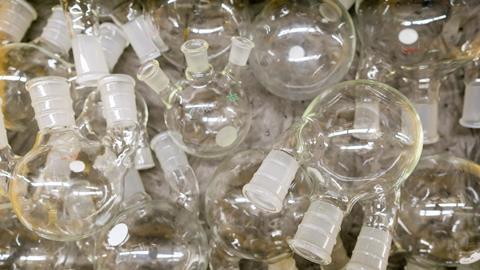 The rate that an amine transfer reaction proceeds at is boosted when it takes place in a glass vessel, as opposed to plastic one.1 The findings suggest that glass particles catalyse the Katritzky reaction by acting as a base, potentially offering a reusable green catalyst for this and possibly other reactions.

Apparatus and experimental set-ups have been known to inadvertently affect reactions before. Last year researchers found that cleaned stirrer bars are often still contaminated with metal catalysts which can alter experiments. Meanwhile, molecular nitrogen – often used as an inert carrier gas – was found to accelerate reactions that use ruthenium-based catalysts.

It was already known that glass containers are not inert and can influence certain reactions by shedding particles. For example, soda-lime glass, the most widely used for bottles and windows, has been shown to catalyse the polymerisation of methyl methacrylate.2 Borosilicate glass, such as Pyrex, can also catalyse the ionisation of xenon difluoride.3

Now, Yangjie Li and colleagues in Graham Cooks’ lab at Purdue University, US, have observed a new phenomenon. They found that glass containers and particles accelerate the Katritzky transamination reaction – which converts primary amines into pyridinium salts – at the solid–solution phase.

‘Silica and glass beads are widely used supports in solid phase organic synthesis and heterogeneous catalysis,’ explains Michael North, who investigates green organic chemistry at the University of York, UK. ‘There has, however, always been an appreciation by those working in these areas that they are not innocent, inert support materials, which is one reason why they are often silylated to remove surface SiOH groups.’

The latest phenomenon was discovered when Li was investigating reaction acceleration associated with solution–air interfaces. She was doing calibration experiments in a glass beaker using the Katritzky pyridinium formation as a model reaction when she noticed a small effect that seemed to be related to the area of the solid–solution interface. 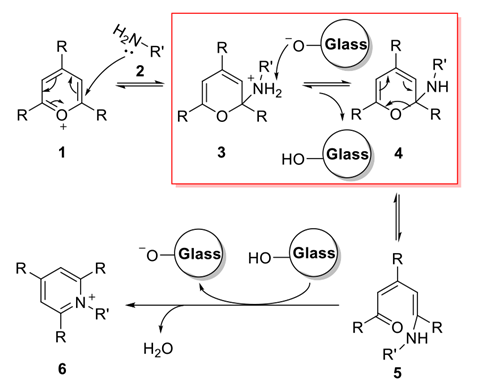 Mechanism of Katritzky reaction when glass is involved: ring opening promoted by silanolate ions on glass surfaces is highlighted in the box

Exploring the kinetics of the reaction, Li and colleagues performed experiments with both glass and plastic vials and found that the reaction rate increased in glass, the effect being greater at lower reagent concentrations. To investigate further, the researchers introduced glass particles from glass wool into the reaction solution, which increased the rate substantially.

Glass wool was then pre-treated by silanisation to block silanol groups on the glass particle surface. In these experiments, no catalytic effect was observed, suggesting that siloxyl groups were responsible for the rate increase by acting as a base in the deprotonation step. To quantify the effect, the team added glass micropheres to the reaction mixture in plastic vials, finding the reaction was 33 times quicker than without glass.

‘SiOH groups are well known to be capable of acting as Brønsted acids and this paper shows that they can also act as Brønsted bases,’ comments North. ‘To me the surprising thing about the results in this paper is therefore not the catalysis per se, but the two orders of magnitude rate enhancement observed. Given how ubiquitous glassware is in chemistry laboratories, there deserves to be a better appreciation of the potential ability of silanol and silyloxy groups on its surface to act as Brønsted acids and bases.’

‘If the effect is general, then tossing some glass into a reaction vessel and filtering it off at the end will save time and money and avoid use of caustic or expensive chemicals,’ says Cooks. Li also suggests there could be other reactions too. ‘We’re currently exploring more reaction types and have already found several more reactions that can be affected by glass, including elimination reactions and condensation reactions which will be followed in another publication.’