Researchers have used lasers and a honeycomb-inspired polymer film to bunch electricity-producing bacteria tightly together. The technique could improve the efficiency of microbial fuel cells used in waste water treatment or biofuel production, and may offer a new way to study bacteria.

Microbial fuel cells (MFCs) use certain species of bacteria, such as those from the Geobacter genus, to generate energy. The bacteria oxidise organic molecules in their cells, and this reaction can be coupled to an anode that accepts the electrons the bacteria produce. In order to maximise electricity production in a MFC, high densities of bacteria need to be in contact with the electrode. However, it is usually difficult to cajole the bacteria into tight-knit groups, especially as some species can move. 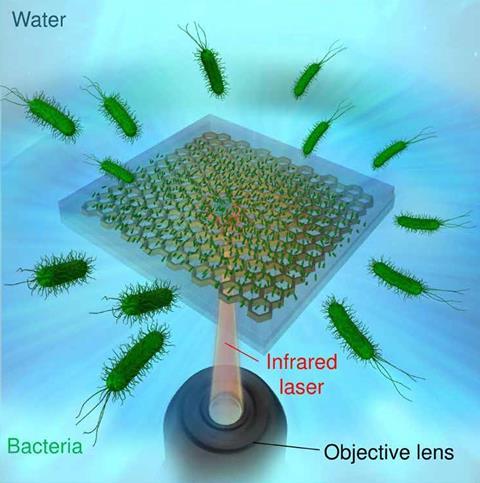 Heating the honycomb structure creates a convection current that carries bacteria across the surface of the honeycomb, and vortices that trap the bacteria in its pores

Now, Shiho Tokonami, Takuya Iida and colleagues at Osaka Prefecture University in Sakai, Japan, have developed a strategy that assembles bacteria into densely packed units in seconds. The technique relies on a honeycomb-structured polymer that traps bacteria in its pores when heated with a laser. ‘Our technology can forcibly assemble bacteria onto the electrodes by light-induced convection, and bacterial functions such as electric power generation can be immediately evaluated,’ explains Iida.

To make the polymer film, the team created a polystyrene and polyion solution that was coated onto a glass slide. Water droplets were then placed onto the polymer solution film in a honeycomb-like pattern to act as a template, leaving behind circular pores in a hexagonal-lattice pattern when the resulting polymer dried. This was film was then coated with a light absorbing nanolayer of gold.

Next, the team added bacteria to the polymer and fired an infrared laser at the walls separating the pores. This heating caused water bubbles to form, which generated a horizontal thermal convection current that transported bacteria across the polymer and into its pores where they became trapped in a vortex.

‘We were surprised that even movable bacteria with flagella fell into the pores and could not escape, where they were confined and moving in each pore,’ says Tokonami. ‘Moreover, we were surprised that we could trap bacteria at a high density maintaining a higher survival rate beyond our predictions.’

The honeycomb structure also helped to prevent heat conduction that would kill the bacteria – between 80% and 90% of the bacteria survived the high heat of the laser. Using a non-patterned, flat substrate, the survival rate was less than 30%.

Further experiments revealed the electrical current produced could be upped by between one and two orders of magnitude by firing the laser more frequently. As well as potentially making MFCs more efficient, the team suggests its method could improve other microbial devices, such as those that explore the function of gut microbes, or to speed up investigations of pathogenic bacteria and viruses for food inspection and medical diagnoses.

‘Controlling the spatial distribution and density of electricity-producing bacteria at the micron-scale provides unprecedented flexibility in the design and fabrication of a variety of microbial devices,’ says Yat Li who investigates MFCs at the University of California, Santa Cruz. ‘Applying this assembly technique to larger-scale and different substrates, and lowering the cost would need to be addressed for future applications.’