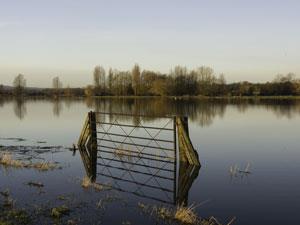 There will be serious, pervasive and irreversible consequences if the world doesn’t tackle climate change, according to the latest Intergovernmental Panel on Climate Change (IPCC) report. But, in a new approach, the IPCC says that science can offer ways to adapt to climate change and reduce risk – something that should be used in combination with cutting emissions.

The report, the second of a trilogy, examines the impacts of climate change. If it has a single message, it is that the world faces a series of difficult challenges, no matter what it does, says Chris Field, co-chair of the IPCC working group. ‘We definitely face challenges, but understanding those challenges and tackling them creatively can make climate change adaptation an important way to help build a more vibrant world in the near-term and beyond.’ Examples of adaptation include constructing barriers to protect against rising sea levels, or growing crops capable of surviving high temperatures and drought. Field says that it is important to prepare for a changing future where ‘bolder, more ambitious adaptations will be important as climate and society continue to change’. Although even serious, sustained investments in adaptation will face limits if emissions keep increasing, he adds.

Global temperatures have risen by 0.8°C since pre-industrial times and this has already affected agriculture and ecosystems, says Rachel Warren of the Tyndall Centre for Climate Change Research at the University of East Anglia, UK, who was involved in writing one chapter of the report. ‘If temperatures rise by 2°C, there will be further impacts to ecosystems, increased levels of extreme weather and problems for crop yields and water supplies,’ she adds. ‘If temperatures go above 2°C, we will risk melting of the Greenland ice sheet and other large-scale changes. By 4°C, there will be a high impact on global agriculture, water resources and ecosystems, and a high risk to the Greenland ice sheet. Most world regions will be affected.’

Meanwhile, Richard Tol of the University of Sussex, UK, caused some controversy when he asked for his name to be removed from the final report as lead author of the chapter on economics. He was concerned that some aspects of the projected effects were ‘alarmist’, such as the impact on conflict and migration. Field believes, however, that the IPCC has presented an accurate reflection of the scientific community’s overall position.

‘Whilst there are uncertainties associated with future climate change impacts, this report demonstrates an overwhelming scientific consensus about what we do, and do not, know well,’ comments Paul Bates of the University of Bristol, UK, and member of the Royal Society working group on human resilience to climate change and disasters.

Politicians were quick to back the report. John Kerry, US secretary of state, said: ‘Denial of the science is malpractice. The costs of inaction are catastrophic. Let’s make our political system wake up and let’s make the world respond.’ The UK’s secretary of state, Edward Davey, commented that ‘this evidence strengthens the case for early action’.

Following this latest ‘wake-up call’, Andrew Steer of the World Resources Institute in Washington, DC, sees ‘signs of renewed momentum’ to address climate change and believes this will mount in the coming months. In September, the UN’s summit on climate change in New York will bring together world leaders to commit to specific actions to shift to a low-carbon pathway, he says, while the Kyoto Protocol meeting in Lima in December is preparing for a new universal climate agreement in 2015.

James Cameron of Climate Change Capital, a private asset management and advisory group, also predicts much more activity from governments on climate change in the next two years. ‘In addition, institutional investors will be looking to invest away from risk and towards opportunity,’ he says. The energy, water and food sectors become ‘critical investment arenas for absorbing the evidence’ of the IPCC. ‘We all have to get much smarter at integrating this evidence into how we make decisions in government and business.’

The UK government is failing to effectively communicate climate science to the public, according to a report by the House of Commons science and technology committee. The MPs found little evidence of coordination among government, government agencies and public bodies, and say all ministers need ‘to acquaint themselves with climate science’ so they can consistently reflect the government approach in all their communications, especially with the media.

The report also criticises the BBC for its reporting on the issue, saying that journalists at the organisation continue to make mistakes by giving opinion and scientific fact the same weight.  The report notes that the BBC rejected Steve Jones’ recommendation to avoid false balance on climate change reporting.