French scientists have developed a way to mix fluids in microfluidic devices using light from an external LED as a trigger. The strategy is simple but offers good control over mixing without complex components.

‘Most people who developed mixers for microfluidic devices up to now were physicists and they usually used quite sophisticated methods such as lasers or optical tweezers,’ says team leader Damien Baigl from the University Pierre and Marie Curie and École Normale Supérieure in Paris, France. ‘But this is a solution from chemists.’

The team injected two oils, separated by an aqueous solution, into a microfluidic device containing a series of chambers. Initially, these flowed through the device in distinct streams without mixing. The water stream contained light-sensitive azobenzene surfactants whose properties change when exposed to UV light. ‘When we apply light, we change the surface tension of the [aqueous stream] and create droplets. These droplets then start to mix the liquids,’ explains Baigl. 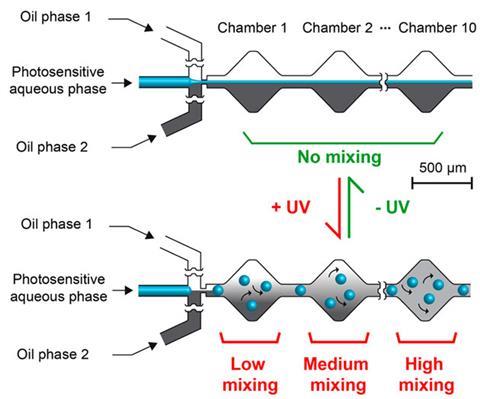 The surfactant in the aqueous stream switches when the light is applied, making droplets that mix the oil streams

The advantage of using LED light to trigger mixing is that it offers more control compared to passive systems based solely on the shape of the device, but is more straightforward than active mixers, which usually rely on electrical or mechanical components and add to a device’s fragility, cost and complexity. ‘This technique could one day be used in devices which could be bought cheaply and which are robust, as there is no need for complicated valves or electrodes,’ Baigl says.

‘Using UV LED illumination to generate droplets is not only clever and innovative, but also low cost, compact and easy to fabricate. The mixing approach is robust and reversible,’ comments Vasan Venugopalan, a biomedical engineer at the University of California, Irvine.

He adds that the fact that mixing occurs in an extended spatial region and displays slow kinetics – perhaps too slow for some applications – are potential downsides. Also, the technique uses UV light, which may be incompatible with some biological applications. ‘These are small quibbles though and will likely be improved upon in future manifestations,’ says Venugopalan.

It is an ‘eye-opener that photosensitive surfactants can be used for complex applications such as mixing,’ notes Claus-Dieter Ohl, a biophysicist and microfluidics scientist at Nanyang Technological University in Singapore. ‘The core idea to switch from a continuous flow to a periodic flow to induce mixing is very general and can be used for many configurations.’

‘There may be important applications where this technique can be applied. Yet it is a complex interplay of liquids with different surface properties, viscosities and densities,’ he says. ‘I just doubt that suitable dyes with the right properties can be easily found.’

Ohl adds that microfluidics for point-of-care medical devices, such as analysing a patient’s body fluids at home, involves fast chemical reactions and mixing pH-sensitive dyes and antibodies. ‘The challenge I see in this approach,’ he says, ‘is to demonstrate it for a meaningful analytical system.’