Photoexcitation can transform a racemic ligand into one of its enantiomers 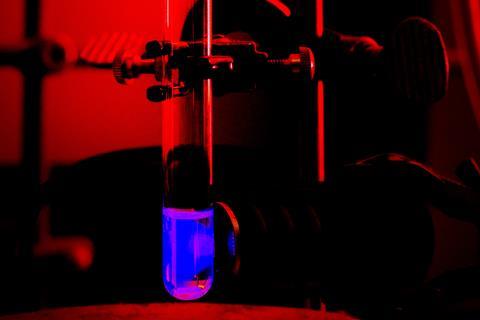 Many molecules in chemistry possess handedness, and come in left- or right-handed forms called enantiomers. Chemists are typically only interested in one of these forms for organic synthesis or drug discovery. Binol ([1,1’-binapthalene]-2,2’-diol) is an important chiral compound that can act as a ligand or organocatalyst in many different organic reactions. There are several ways to obtain enantiopure Binol, including chiral chromatography, resolution or synthesis – but these have drawbacks, such as wasting valuable starting materials. 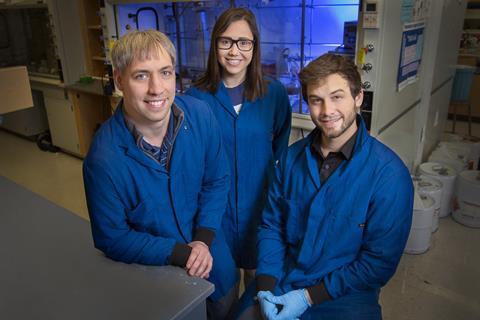 A team of scientists led by Kenneth Hanson of Florida State University has obtained Binol in 63% enantiomeric excess using a chiral auxiliary attached to the Binol and photoexcitation. The method is straightforward, although Hanson says that ‘the photochemistry itself – how the chiral group directs the isomerisation and the enantiomeric excess – presents really interesting, fundamental questions.’

(R)- and (S)-Binol react with a chiral auxiliary such as the amino acid proline, which acts as a bulky directing group, and are then illuminated using an LED with toluene and triethylamine.

During the illumination, excited state proton transfer occurs. Peter Wan from the University of Victoria in Canada leads a group that initially investigated the photoracemisation of Binol.2 He describes this work by the Hanson group as elegant, with ‘the photons being used as a way of amplifying the concentration of one of the two interconvertible diastereomers’.

Once photoisomerisation has occurred, the chiral auxiliary is cleaved under mild conditions. The choice of chiral auxiliary influences the equilibrium of the photostationary state, and the researchers are modelling this process with computational methods such as density functional theory with an eye to increasing the enantiomeric excess and eventually providing only a single enantiomer.

José Alemán and Alberto Garrido-Castro, of the frontiers in catalysis group at the Autonomous University of Madrid in Spain, are enthusiastic about the potential of this strategy, describing it as ‘an amazing conceptual work which opens the door to an impressive range of new asymmetric reactions’ and ‘undoubtedly, a very valuable contribution’.

Hanson is excited to see applications of this work, commenting that ‘ultimately, I think that the use will be for organic chemists – you can envision making enantiopure Binol in situ, and then generating your catalyst and doing reactions’.