For the first time, scientists have made a molecular motor from lignin-containing hardwood.

Lignin is a natural polymer and a key component of plant cell walls. It is also the largest renewable source of aromatic chemicals. Although lignin depolymerisation strategies have been used to produce various aromatic platform chemicals, converting lignin into high-value molecules with specific functions, such as molecular motors, is underexplored. 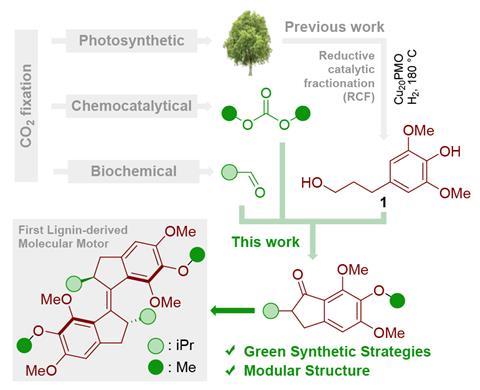 Since dimethyl carbonate and isobutyraldehyde can be obtained from carbon dioxide via chemical and biochemical catalytic procedures, respectively, the molecular motor can be sourced entirely from renewable feedstock

In 2018, a team surrounding Katalin Barta, from the University of Graz in Austria, reported a reductive catalytic fractionation strategy that combined biomass fractionation and lignin depolymerisation to produce dihydroconiferyl alcohol and dihydrosinapyl alcohol from softwood and hardwood, respectively. The method used a copper-doped porous metal oxide (Cu20 PMO) catalyst, which allowed the chemicals to retain their primary alcohols. This functionality is important for further conversion to indanones, which can serve as building blocks for molecular motors and switches.

Now, Barta has teamed up with Ben Feringa at the University of Groningen to prepare a light-driven unidirectional molecular motor (see interactive structure below) in six environmentally benign steps from lignin-derived dihydrosynapyl alcohol. Using a modular synthetic strategy based on the principles of green chemistry, they showed for the first time that such a highly sophisticated functional molecule can be made from entirely renewable resources.