Lignin cut down to size by nickel catalyst

A nickel-based catalyst has been created that can depolymerise lignin, opening the way to green chemicals from biomass

A nickel-based homogeneous catalyst that breaks down lignin - the tough polymer that forms plant cell walls - into useful building blocks suitable for chemicals, including green fuels, has been developed by US scientists. The team says that the nickel catalyst is more efficient than current heterogeneous catalysts, although industrial applications are still some way off.

The search for efficient biomass conversion methods to produce useful, green and sustainable products has gained much ground in recent years. However, a major obstacle has been that the main components of biomass - namely cellulose and lignin - are tough polymers that do not break down easily. Lignin comprises a network of ring-like monomeric nine carbon hydrocarbon units that are principally connected by C-O bonds. Cleaving these bonds without breaking open the individual ring structures is crucial to produce useful chemical building blocks, rather than a mixture of short chain hydrocarbons. 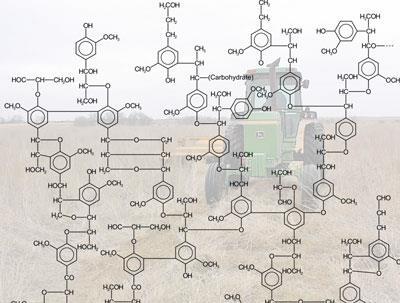 Lignin is found in abundance in biomass, but its complex structure makes it difficult to convert into useful chemicals

Previous systems for cleavage of aromatic C-O bonds in aryl ethers were based on heterogeneous catalysts that require high pressures and temperatures. Furthermore, these systems work by competing C-O bond cleavage and hydrogenation of the aryl ring, leading to complex mixtures, which wastes hydrogen.

Now, Alexey Sergeev and John Hartwig at the University of Illinois at Urbana-Champaign, US, have developed a homogeneous nickel-carbene catalyst which selectively cleaves aromatic C-O bonds in various aromatic ethers without reduction of aromatic rings or cleavage of aliphatic C-O bonds. In addition, compared with other catalytic systems, theirs functions at lower temperatures and pressures.

’We were surprised that such a simple catalyst is able to do such a challenging transformation of a number of unactivated aryl and benzyl ethers with such high selectivity,’ says Hartwig. ’Because the catalyst is able to cleave aromatic C-O bonds in aryl ethers selectively, it could allow the production of nine carbon arenes from lignocellulosic biomass. These arenes can be used for the production of chemicals or, ultimately, green transportation fuels,’ he adds.

However, before the catalyst is ready for industry the system needs to be made more practical by decreasing catalyst loadings by several orders of magnitude. The catalyst’s stability in the presence of moisture also needs to be improved as biomass tends to have a high water content.