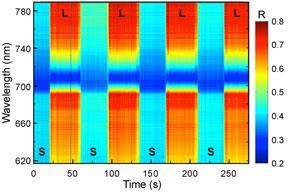 US researchers have developed a nanomoulding technique for patterning liquid gallium that enables surface plasmons to become excited using visible light. The work demonstrates how liquid metals and phase changes might be used for photonic-based circuitry in future devices.

'Previous work on SPP propagation along a liquid metal surface was limited to excitation of SPPs in the far infrared, or required complicated set-ups,' says Odom. 'By monitoring the plasmonic properties at the Ga-dielectric interface during the phase changes, we observed a significantly larger switching contrast between the liquid and solid state than any other reports.'

The team made a polyurethane template of the desired grating structure, then moulded liquid Ga against the template. By filtering the Ga to eliminate surface oxide impurities, the team could pattern Ga in gratings with 400nm periodicity and sub-100nm features.

'While the optics of a plasmon is widely accepted and understood, the processes by which a plasmon can interact with the wider environment are not so well understood in a number of cases – most notably catalysis – and so any new technique to produce a plasmonic surface is of great interest,' comments Steve Dunn, who investigates nanomaterials at Queen Mary University of London, UK. 'This work makes a further contribution by aligning the modelling of the system with experimental evidence – notoriously difficult for a system of this type.'