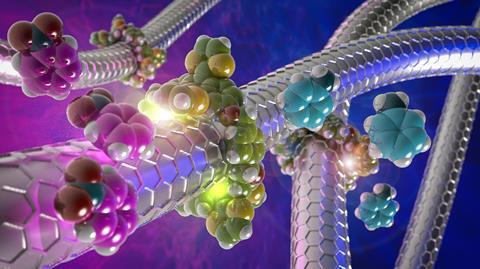 Carbon nanotubes are a green alternative to metallic catalysts. However, tuning their activity relies on difficult and invasive chemical processes that normally damage the nanotubes’ structure. Now, only a few years after reporting the first mechanically interlocked nanotube derivatives,1 Emilio Pérez and his team at the IMDEA Nanoscience Institute in Madrid, Spain, have envisioned how to use these non-covalent modifications to power up the catalytic activity of carbon nanotubes.2 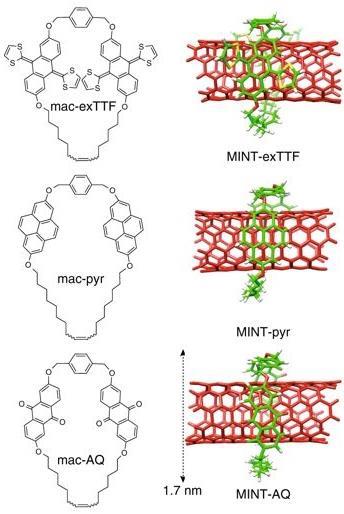 ‘Carbon nanotubes have a hard time when they undergo chemical modification,’ explains Pérez. ‘We decided to give interlocked molecules a try, and it worked.’ The researchers mixed some single-walled nanotubes with U-shaped precursors of the macrocycles. Then, as soon as they added a tiny amount of Grubbs catalyst, the rings started surrounding the carbon nanotubes, so they end up covered in macrocyles.

Silvia Marchesan, who investigates carbon nanotubes at the University of Trieste, Italy, describes the strategy as sort of a chemical disguise: ‘You can think of dressing the nanotubes with clothes that temporarily alter their properties.’ She also highlights how clean the process is: ‘They manipulate carbon nanotubes threading them through the macrocycles, leaving the covalent structure of the tubes unaltered.’

Because of their non-covalent nature, Pérez likes to compare these new catalysts to enzymes, ‘although their mechanism of action is totally different’. ‘The macrocycles modify the electronic properties of the nanotube without interfering with the catalytic site – the “naked” carbon nanotubes walls,’ he explains. As a proof of concept, Pérez’s team used their catalysts to reduce nitroarenes. ‘Electron-withdrawing macrocycles slow the reaction down, while electron donor rings quicken it,’ says Pérez. ‘In some examples, the reaction is accelerated up to 15 times its normal speed.’

The interlocked macrocycles also impede the aggregation of carbon nanotubes, which could also boost their catalytic performance. However, Marchesan believes that ‘the trends in enhancement or reduction of the catalytic activity clearly show an effect due to the electronic effects of the macrocycles involved.’ The fact that the interlocked molecules impede aggregation is just ‘a nice additional property to get the best performance out of the nanotubes,’ she adds.

‘Controlling the electronic properties of nanotubes could have implications beyond catalysis,’ explains Pérez. ‘We could engineer modified carbon nanotubes on demand, which could find applications in electronics and sensors,’ he adds. ‘The technique shows great promise, because you have very stable products while keeping the high-surface structure of the nanotubes.’ Marchesan also dreams about the possibilities of mechanically interlocked nanotubes: ‘It is an interesting approach to build complex supramolecular architectures, for instance to create on–off switches.’