A simple device made from two magnets, some polymer beads and a tube of liquid can measure how strongly a protein binds to a ligand, say US chemists. The technique could be used to make devices to diagnose disease quickly and simply in the field in developing countries.

The work is led by George Whitesides of Harvard University, who points out that magnetism is an underexploited force in chemical analysis. ’Unlike electrostatics - where if you take a positive and negative charge and put something like water between them, it makes a world of difference - magnetic interactions can see through almost anything,’ he says. 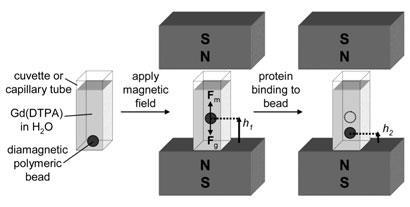 He also points out that density is a universal property. ’All matter has a density,’ he says, so a cheap and simple way to measure density and relate that to other properties opens a window to getting information about all sorts of interesting materials. That frugal simplicity is also crucial for applications in the developing world. ’We can make very precise measurements of density with nothing more than a cuvette and two solid state magnets,’ he explains. ’The total device cost is something like $10 (?6).’

The device works by magnetic levitation - balancing magnetic forces against gravity. A cuvette or capillary tube, full of a paramagnetic salt solution like manganese(II) chloride or a gadolinium salt, is the key component. These salts are attracted towards areas of high magnetic field, Whitesides says, ’so when you put a magnet under the cuvette, the manganese wants to be at the bottom’. 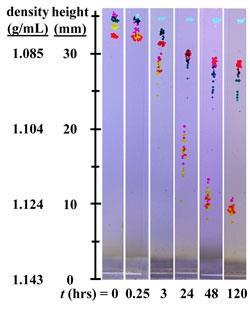 Several ligands can be tested in parallel on different coloured beads. The stronger the binding, the further the bead sinks

This density gradient means that when you introduce another object to the solution - in this case a polymer bead - it levitates at a position dictated by its density. But how does that relate to protein binding? The team functionalised polymer beads with molecules that bind to the enzyme bovine carbonic anhydrase, then added the protein to the solution. ’The protein then binds to the bead, and because it’s more dense than the bead, the combination is more dense and the bead sinks,’ says Whitesides. The strength of the binding interaction dictates how much protein binds to the bead and hence how far it sinks, which can be measured with a ruler and either the naked eye or a camera. By adding coloured fluorescent dyes to the beads as well, Whitesides notes, multiple different ligands can be tested in parallel.

’It’s a great and inspiring paper,’ says Sabine Flitsch, who studies protein binding at the University of Manchester, UK. ’It will provide inspiration to chemists, biochemists and engineers to come up with solutions to overcome current limitations and find applications for magnetic levitation.’

One of those limitations is speed, says Whitesides. ’The slow step is the protein diffusing into the interior of the bead, which means the pores are too small for big proteins. So one of the things we need to do is get a bead with bigger pores.’ However, Whitesides stresses that the aim was to set out the fundamental basis for the technique and build models to develop into more specific applications.