A cheap modification can sweep away dust in minutes, no brushing required

A system that generates electrostatic waves to sweep dust from solar panel surfaces has been developed by US scientists. The device should help the panels maintain maximum efficiency, be cheap to incorporate into their manufacture and be easily retrofitted to existing panels.

A tiny layer of dust can drastically affect the light-harvesting ability of solar cells - just a few grams per square metre can cut the efficiency in half Boston University’s Malay Mazumder explained at the American Chemical Society national meeting in Boston, US. And the places that get the most sun tend to be dry and dusty. 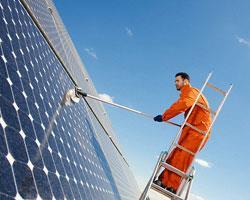 ’In the Mojave desert in the US, dust accumulates on panels at a rate of 17g/m2 per month,’ he adds.

The technology was originally developed for remotely controlled space rovers. ’On Earth, panels are cleaned mostly by sprinkling them with water, which comes with a high labour cost and uses up a scarce resource,’ says Mazumder. ’On the moon or Mars there is no water and a lot of dust, and you can’t just send a graduate student to clean the panels,’ he quips.

The team’s device works by laying a grid of transparent electrodes made from indium tin oxide across the top of the panel, embedded in a layer of either glass or plastic. ’It looks a bit like the heating elements in a car windscreen,’ says Mazumder.

When activated, the electrodes send waves of charge across the surface. This polarises the dust particles, lifts them off the surface, and carries them off the edge of the panel. The wave can remove more than 95 per cent of accumulated dust in a couple of minutes, and is powered by diverting a small amount of the panel’s electrical generation. Mazumder envisages including a sensor system in the future that triggers wave generation when a certain amount of dust accumulates.

Mazumder says he is confident that the technology is simple enough to incorporate into current panel manufacturing techniques. ’Solar cells are made in layers and this is just an extra layer on the top or a modification or the normal glass top layer.’ It should add only 1 per cent to the panel cost and could be retrofitted to existing panels relatively cheaply, he estimates.

Voytek Gutowski, who develops functional surfaces at the Australian Commonwealth Scientific and Industrial Research Organisation, is impressed by the simplicity and effectiveness of the system. ’The efficiency of solar cells is still lower than we would ideally like, so they really need to be clean to get the maximum energy,’ he says.