Whilst searching for oil, a team of international scientists have found something completely different -proof that animal life existed more than 635 million years ago. That’s at least 40 million years earlier than previous discoveries had shown.

The team led by Gordon Love at University of California, Riverside, US, analysed extractable hydrocarbons in the South Oman Salt Basin and found a 30-carbon (C30) sterol biomarker, confirming that sponges existed in this area during the late cryogenian period. 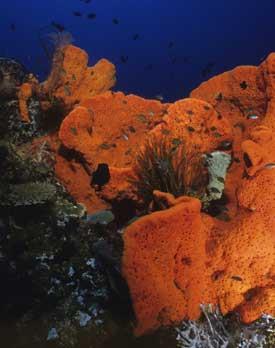 The South Oman Salt Basin contains one of the world’s oldest deposits of oil. ’We were there to make up molecular fingerprints to find oil for the oil companies,’ explains Love. ’They wanted to get a better handle on the rocks they were drilling their oil out from, and C30  was just one of many hydrocarbons we were looking at.’

The team first drilled a sediment core. ’We then dated parts of the core using uranium-lead isotope dating,’ says Love. Next, for each layer of interest they took samples, and extracted out the organic compounds, resolved them using gas chromatography, and then used mass spectrometry to detect the fragments of interest (even though they were only a very small percentage of all the compounds present).

In the oldest sample from the core, dated as being more than 635 million years old, the team located the C30 chemical biomarker 24-isopropylcholestane -known to only originate from the lipid membranes of marine sponges.Love was also able to confirm that the biomarker had not migrated from the younger rocks.

This is ’40 to 50 million years earlier that any fossil sterols seen before’, says Love. Kevin Peterson, Dartmouth College, Hanover, US, had previously predicted that animal life started at this earlier date, but this is the first time any proof had been found, Love explains.

Peterson says that these findings are ’very exciting’ as they provide the first direct evidence that his predictions were correct. ’Love’s findings have the gee wiz factor that these are actual chemical remnants of animals that live in that time period.’

Love now wants to see if proof of animal life can be found even earlier. And in order to do this they have had to relocate to south China. ’We are now looking at basins where the sediment is 1000 to 1800 million years old,’ says Love. ’We are particularly interested in when algae first appeared,’ he adds.