The researchers modelled Mars’ methane cycle and ruled out the possibility that dynamic effects, such as general circulation in the Martian atmosphere, are responsible for varying concentrations of the gas across the planet. The finding deepens the mystery of variations in Martian methane, which are at odds with  accepted theories of methane photochemistry, says the team. 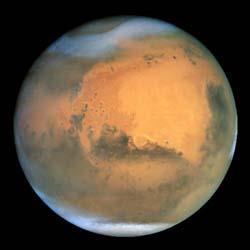 Methane on Mars - which could be a potential sign of life on the planet - was first detected in 2003. According to standard photochemistry, methane should have a lifetime of several centuries before it is destroyed by UV radiation. This timescale suggests that it should be distributed evenly in the Martian atmosphere.

However, in January this year, Michael Mumma and colleagues at NASA reported detecting plumes of methane on Mars, pointing to an uneven distribution of the gas that varies locally and seasonally. These results implied that Martian methane has a much shorter lifetime, possibly of around a year - but this would seem to go against our known understanding of photochemistry.

Now, Franck Lef?vre and Fran?ois Forget at Pierre and Marie Curie University in Paris have used a global climate model of Mars with coupled chemistry in an attempt to elucidate the methane cycle on Mars. ’We show that the observed variations of methane imply that the CH4 chemical loss is 600 times faster on Mars than predicted by the standard chemistry,’ says Lef?vre. ’This means that the source must be 600 times stronger than previously thought and these two extraordinary phenomena must occur at the same time to explain Mumma’s observations in 2009,’ he adds.

According to Mumma, director of NASA’s Goddard Center for Astrobiology, ’this new study confirms the very short lifetime for methane that was implied by our results.’ Lef?vre and Forget suggest that a photochemical lifetime of about a year would be compatible with current observations if methane is destroyed over a large column of atmosphere.

Sushil Atreya, an expert on Martian methane at the University of Michigan in Ann Arbor, US, thinks the research is’a useful contribution, as it lays to rest any lingering ideas anyone might have had that the observed behaviour in methane is due to an atmospheric dynamics effect.’ One possible explanation that Atreya has previously put forward for methane’s variation is rapid surface loss of methane. This would require a process much more efficient than photochemistry, most likely involving strong oxidants such as peroxide or superoxides derived from it, or posisbly perchlorates.

’Our work adds more mystery than understanding to the story of the Martian methane,’ suggests Lef?vre. Although the team say such methane variations would suggest an extraordinarily harsh environment for the survival of organics on the planet, they do not rule out the possibility of life. ’Life or remnants of past life could be protected from oxidants deeper in the [planet’s surface layer]. Besides, the fact that a stronger CH4 source is needed to explain the observations, if it does not prove a biological origin, it does not rule it out either,’ adds Lef?vre.