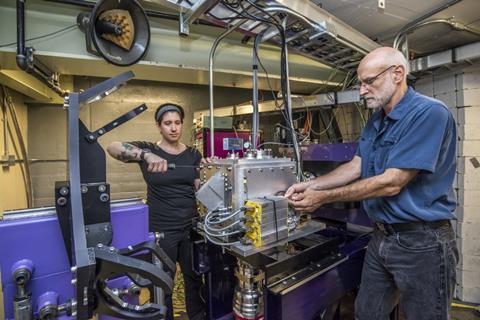 Jackie Gates, left, and Ken Gregorich, work on Fiona during its early commissioning in 2017

The atomic masses of elements 113 and 115 – nihonium and moscovium – have been measured directly for the first time by researchers at the US Department of Energy’s Lawrence Berkeley National Laboratory using an instrument called Fiona (For the Identification Of Nuclide A).

Previously, the masses of these elements have had to be worked out by observing how they decay or using different target materials to produce the same isotopes. Particle physicists have been keen to confirm these values experimentally for years, because indirect measurements rely on the accuracy of nuclear mass models, which don’t necessarily apply to the nuclei of superheavy elements.

The researchers produced moscovium in the facility’s 88-inch cyclotron by bombarding an americium-243 target with calcium-48. Where these collisions resulted in the formation of a moscovium atom – which happened on average once a day – it could be trapped by Fiona, which uses the timing and position of the energy signal picked up by a detector to measure the atoms’ mass-to-charge ratio. Over time, the researchers have been able to improve the detector’s sensitivity and make it better at isolating the signal from moscovium from other noise. After years of efforts, they have made the first definitive measurements of moscovium, which indicate it has a mass number of 288, agreeing with indirect calculations.

The researchers were also able to confirm the mass number of element 113 – nihonium – as 284, when a moscovium atom decayed into nihonium before reaching the detector. They are now planning further experiments on nihonium and moscovium, and say they could potentially use the same tools to measure other superheavy elements.