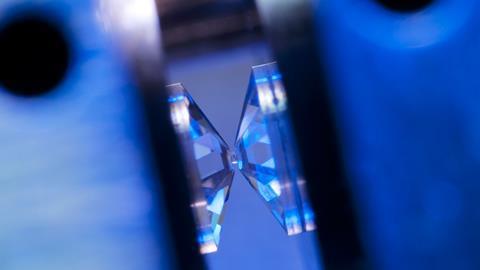 The French group that in 2020 produced the most convincing evidence yet that hydrogen forms a metallic state at high pressures has now shown that at even higher pressures deuterium can become metallic. These findings support the theory behind the 2020 claims, and may also assist in the study of novel high-pressure superconductors.

In theory, all elements become metallic at sufficiently high pressures as the atoms are squeezed close enough that the electrons become delocalised. Modelling the metallisation transitions precisely, however, is extremely difficult. The metallisation of hydrogen has long attracted particular interest, partly because it is the simplest system but also because quantum delocalisation should be apparent in the nucleus as well as the electrons.

The Nobel prize-winning theoretical physicist Eugene Wigner and colleague Hillard Huntington predicted in 1935 that metallic hydrogen would form when the molecules completely dissociated. Multiple groups have claimed to have observed this Wigner–Huntington transition in the past 30 years, but no experimental realisation has been generally accepted. A 2017 claim by researchers at Harvard University, who compressed a single sample to around 495GPa, remains disputed.

Photographs of the deuterium sample under white light illumination above 400GPa at 80K. The darkening of the sample (right) is indicative of a phase change to metallic deuterium

In 2000 Neil Ashcroft at the University of Cornell and a colleague calculated that hydrogen should form a molecular metallic state at pressures around 410GPa. In 2020, Paul Loubeyre of the French Alternative Energies and Atomic Energy Commission and two colleagues compressed hydrogen in a modified diamond anvil cell and used Raman spectroscopy and synchrotron infrared absorption to measure a sudden drop in the band gap from 0.6eV to below 0.1eV at a temperature of 80K and an estimated pressure of 425GPa. This was seen as relatively convincing evidence.

There was, however, an outstanding theoretical prediction. ‘Transitions can occur more easily when you have quantum motions that allow hydrogen atoms to tunnel from one point to another,’ explains experimental high pressure physicist Alexander Goncharov at the Carnegie Institute in Washington DC. As deuterium nuclei are heavier, they should be less delocalised than protons. The metallisation transition should therefore require higher pressure.

So the researchers repeated the 2020 experiment using deuterium. The band gap decreased in a similar manner, but shifted to higher pressures, until it reached around 0.6eV at 460GPa, after which it became immeasurably small. The researchers concluded from the similarity of the two curves that, even at the higher pressure, there was no evidence of molecular dissociation.

Goncharov says that ‘this is a simple phenomenon known for a long time, but making the confirmation is still important – there could have been more complex physics than we imagined’. He hopes that the researchers will now push to still higher pressures. ‘Presumably the metallic state Loubeyre’s group have observed is a bad metal [that has a particularly poor electronic conductivity] or even a very narrow [band] gap semiconductor … so it would be great to get to higher pressures and see where it turns to a monatomic state.’

David Ceperley, a condensed matter theorist at the University of Illinois in the US, agrees, and suggests the work could find other research applications such as in studies of hydride superconductivity. ‘In general it’s very useful to go from mass one to mass two and see what the role of zero-point motion is in these various crystal structures,’ he says.