Macaroni-like microtubes that self-propel using hydrogen peroxide as fuel have been developed by chemists in Japan. The tiny hollow tubes are flexible, simple to manufacture and can capture dyes and bacteria such as E. coli while wandering around a surface.

Structures that work in a very similar way – using platinum to break down hydrogen peroxide and produce bubbles of oxygen that propel them along – have been developed before. But Teruyuki Komatsu and colleagues at Chuo University in Tokyo, Japan, developed a novel method called ‘wet templating’ that allows them to tailor the tubes with layers of different materials using only solutions and syringes. This approach as an advantage over existing ways of making microtubes, because ‘we don’t require any special instruments such as electrochemical [deposition] apparatus or high vacuum systems’, explains Komatsu. 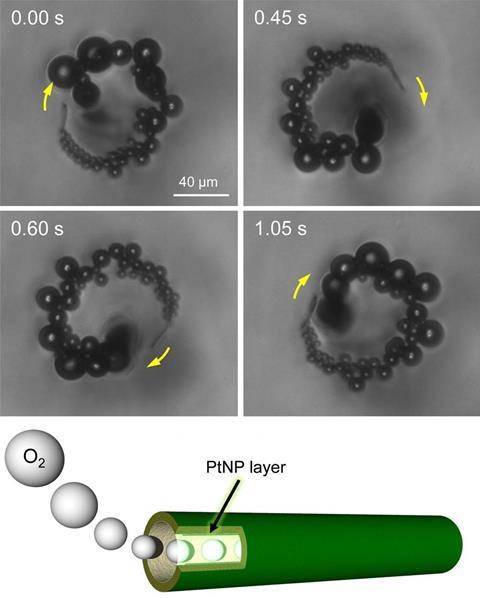 Starting with a polycarbonate template, the team built a protein surface that is then covered by a thin, monoatomic platinum layer. The polycarbonate scaffold is removed using organic solvents such as dimethylformamide. Because the platinum layer is much thinner than the protein surface, the tubes have unprecedented flexibility. Daniela Wilson from the Institute for Molecules and Materials in Nijmegen, Netherlands, comments that this flexibility ‘definitely important for biomedical applications […] in comparison to hard-metal motors.’

Komatsu and co-workers also incorporated a layer of magnetite (Fe3O4) into the microtubes so their movement could be controlled using neodymium magnets. And because the protein they used to construct the tubes – human albumin – can bind to various compounds, the tubes can capture organic dyes and even live bacteria while moving around. ‘[This] is not a new application of self-propelled micromotors […]. The claimed capture efficiency of 99% is, however, superior to previous reports,’ comments Oliver Schmidt, director of the Leibniz Institute for Solid State and Materials Research in Dresden, Germany.

Because of the toxicity of hydrogen peroxide, however, biomedical applications are still a long way off. ‘However, […] the fabrication method seems versatile for employing other kinds of biomaterials […] for diverse applications,’ says Schmidt. Komatsu’s team is already looking to improve on their recipe: ‘We are challenging [ourselves] to prepare photo-irradiation and biological-force induced moving microtubes,’ he says.