Japanese researchers have created an organ-on-a-chip system that simultaneously tests how liver, intestine and breast cancer cells respond to cancer drugs. The team says the microbioassay system could be a more efficient and cheaper alternative to conventional testing methods, and help reduce the number of animals required to test new drugs.

Microfluidic systems that replicate human organs have gained much ground over recent years. By growing a particular organ’s cells in tiny channels and chambers carved into a microchip, these structures can be used as ’mini organs’ as a way to test drug toxicity or as diagnostic tools. Although combinations of multiple organs on a chip have been developed in the past, none have been able to simultaneously test multiple biological processes and reveal how different types of cells interact.

Now Kiichi Sato and colleagues at the University of Tokyo have created a system that does just that, by testing intestinal absorption, liver metabolism, and anticancer activity of oral medicines all at once. ’Oral medicines and food constituents show their effects only after intestinal absorption and hepatic metabolism, but no in vitro bioassay system is available that can simultaneously test both bioavailability and bioactivity,’ explains Sato.

The team created their microchip using a glass slide and two sheets of polydimethylsiloxane (PDMS) which were etched with two microchannels and three microchambers using photolithography and then sandwiched together. Intestine, liver and breast cancer cells were then cultured in separate chambers on the microchip to mimic a living system, with the upper channel acting like the intestinal lumen and the lower channel as a blood vessel. 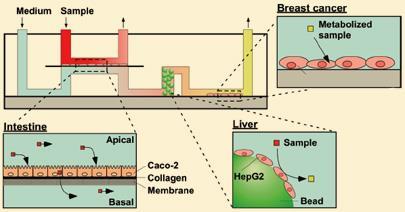 The system uses a microintestine, microliver, and the target components (in this case, breast cancer cells) to test orally administered substances

To test the system, the team introduced various anticancer agents which were known to actively kill breast cancer cells following metabolism in the liver. They also introduced oestrogen-like compounds which are known to disrupt the endocrine system and stimulate the growth of breast cancer cells. By knowing how these substances behave in the body, their experiments revealed the correct activity of these substances as they made their way through the microintestine, microliver, and finally the breast cancer cells. ’By using this system, the overall properties of ingested anticancer agents and oestrogens could be assayed with ease,’ says Sato.

Renowned chemist George Whitesides at Harvard University in Massachusetts, US believes the system shows promise. ’The strong feature here is the ability to work with human cells and to look at metabolites produced in one cell-based system, and to see how they interact in another.’ Whitesides suggests that it could have potential use for the pharmaceutical industry as one of the many screens used in early stage lead development programs. ’It would really depend on the cost and commercial availability of the necessary components,’ he explains.

However, Whitesides adds that there is a long road to having a validated on-chip cell-based system that replicates the key features of human metabolism, and especially human population-based toxicology. Indeed, Sato acknowledges that the new system is currently only demonstrating proof of principle. ’There is some technical difficulty to operate the system, and optimisation for a high throughput system will be required for practical use,’ says Sato.