Microscope pinpoints atoms in a lattice

Scientists in the US have successfully imaged the exact position of single atoms in a crystal lattice. The imaging method, a modified form of a scanning transmission electron microscope (STEM), may help researchers to understand how chemical bonding and lattice distortions can affect the performance of alloys.

Since its development in the 1930s, electron microscopy has been used to probe tiny structures in stunning detail, being able to capture the unique structure of a snowflake or the hairy legs on a live beetle. Materials scientists also use it to understand the make-up of an alloy or metal. But despite its high resolution capabilities the community has not been able to image the exact position and movement of atoms within a metal’s crystal lattice.

‘We know where atoms are on average from diffraction methods’, says James LeBeau from North Carolina State University, US. ‘But really understanding where they are on the atomic scale is really something quite different and can be quite difficult.’

LeBeau believes the reason for this is that microscopy is an imperfect discipline. ‘If the temperature in the room changes even a fraction of a degree what’ll happen is there will be thermal expansion of the sample holder and just a few angstroms of movement,’ he explains. ‘Every STEM image up to now has been a corrupted version of what was really there.’

The team decided to correct these ‘wobbles’ by developing a revolving STEM. They simply programmed a conventional STEM to scan the sample in different directions. In doing so, LeBeau and his colleagues were able to pinpoint the distortions brought about by ‘thermal drift’ and completely remove them from the image. 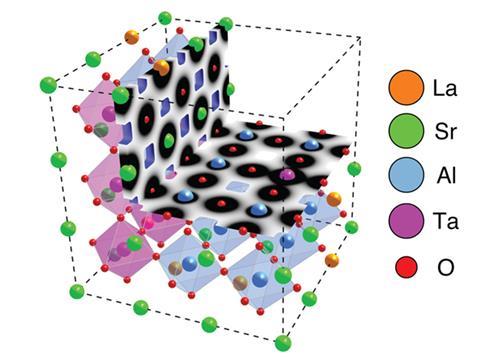 By getting rid of this distortion, the team were able to capture the atomic structure of lanthanum strontium aluminium tantalum oxide (LSAT) – a complex inorganic material used in the production of thin films.

‘We actually [saw] significant distortion or contraction of the lanthanum and strontium around the atom columns … when there is more tantalum in an atom column, you see expansion around it,’ says LeBeau. ‘So what we’re seeing there is a direct correlation between the types of atoms at a lattice site and the magnitude of a distortion.’

‘What that can tell us, is how the local strain states [change] in the crystal. That will influence a whole range of properties,’ he goes on to explain. LeBeau argues that this technique will allow scientists to see how an alloy’s properties change when modifying its atomic structure.

‘What’s really important about this work is the ability to connect lattice strain to composition on an atom-by-atom basis,’ says Paul Voyles from University of Wisconsin in the US. ‘Average strain and average composition have been measured by other techniques for years, but not with this level of direct correspondence at the smallest relevant length scale.’

Ultimately, LeBeau hopes revolving STEM images can be used to complement results obtained from indirect imaging methods, such as x-ray diffraction: ‘What we can do is pair this with that information and really build a much more complete picture of the atomic structure of matter.’