US researchers have developed a new imaging technique which combines the spatial resolution of scanning tunneling microscopy (STM) with vibrational information obtained from infrared (IR) spectroscopy. The technique can simultaneously image and obtain the IR spectrum for small amounts of molecules adhered to a surface.

Detecting and identifying molecules on a surface and understanding how they interact with the surface and each other is crucial for altering the surface’s properties and creating new nanostructures that might have useful applications, including electronic nanodevices.

IR spectroscopy gives much of the required molecular information by measuring the vibration of molecules on a surface, which acts like a molecular fingerprint. However, since IR has no spatial resolution, there has been a desire make it sensitive enough to detect single molecules and so achieve greater control at the nanoscale.

Efforts have previously been made to achieve this by providing STM with chemical sensitivity using vibrational spectroscopy. But such techniques, including STM-based inelastic tunnelling spectroscopy (IETS), had certain drawbacks and so never took off.

Researchers at the Lawrence Berkeley National Laboratory, in Berkeley, California, and at the University of California at Berkeley and Stanford University, California, have devised a technique that overcomes previous limitations by using STM as a sensitive detector to probe the IR response of submonolayers of molecules on conducting crystals. Although it has not yet achieved detection of single molecules, the researchers suggest it shows promise.

'I think that what allowed this new technique is advances in tunable IR lasers. To perform this kind of measurement we must sweep the frequency of a highly stable and reasonably bright IR laser. This was not so easily possible in the past,' says Michael Crommie who led the work. 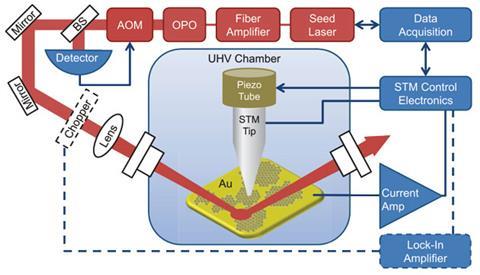 The team built a stable, tunable IR laser that can sweep its frequency through the C–H stretch mode frequency and connected this to a low temperature ultrahigh vacuum STM. They then prepared a clean crystal surface deposited onto gold to test the imaging technique.

'We simply shined the laser light through a viewport and measured the STM tip height as a function of the laser frequency. Much of the development went into getting the laser right, and into making sure that we understood the nature of the STM signal that we are measuring,' explains Crommie.

'So far the authors have achieved the detection of IR signal from monolayers and submonolayers. This is an achievement,' comments Stefan Tautz, a molecular imaging expert at the Jülich Research Centre in Germany.' If it was possible to extend this to nanometre scale or even single molecule resolution, this would be a breakthrough for chemically sensitive STM with many applications in surface chemistry.'

'One of our most important goals is to increase the signal-to-noise of the technique to allow nanoscale spatial resolution of the direct molecular IR response,’ Crommie adds. ‘Eventually we would like to be able to directly image how individual molecules vibrate in response to IR light excitation, although we are not there yet.’