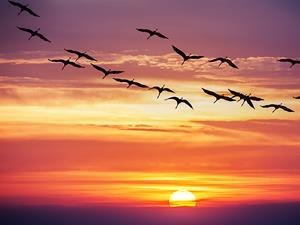 Scientists in the US have designed a biosensor that could be used to study the metabolism of free-flying birds in real time.

There is still much we could learn about wild bird species to help us understand their behaviour, biology and evolution. The fast metabolism of birds makes them very responsive to environmental changes so bird studies are also very useful in ecology research.

Researchers have tracked migration patterns using radio tags and data loggers, but physiological states are mainly assessed by capturing the birds and taking blood samples. Such samples will only provide information of a bird’s current state, which will vary widely depending on the time of year, breeding, migration and so on. A device that tracks a bird whilst monitoring its physiological state would provide in depth information, particularly on migrating birds that travel thousands of kilometres.

Abdurrahman Gumus and colleagues at Cornell University have designed a sensor that could be used to track a bird whilst monitoring its physiology. Gumus says ‘although we have the ability to track the position of birds and, to some degree, correlate their behaviour with environmental conditions, the ability to actually directly link this with the physiological state opens up an entirely new way of conducting ornithological research’.

The sensor is designed to monitor uric acid levels. Uric acid is formed when birds metabolise protein so it can be used as a physiological indicator. Central to the sensor is uricase, an enzyme which catalyses uric acid to hydrogen peroxide producing a current. This data is then transmitted wirelessly.

Francis L Martin, a biosensors expert at Lancaster University in the UK, says ‘I give a cautious endorsement to what is a preliminary study to develop an in vivo biosensor of uric acid. Consideration will need to be given to its applicability as a biomonitoring tool in the wild where many confounding factors such as climate as well as age and health [of the bird] apply.’ He adds that if these factors can be overcome then this will be an important tool for those interested in studying avian species in the wild.

The team successfully tested the device on a chicken and now intend to try field tests on flying pigeons. Further work will be carried out to improve the device, including making it smaller and extending its operational lifespan.