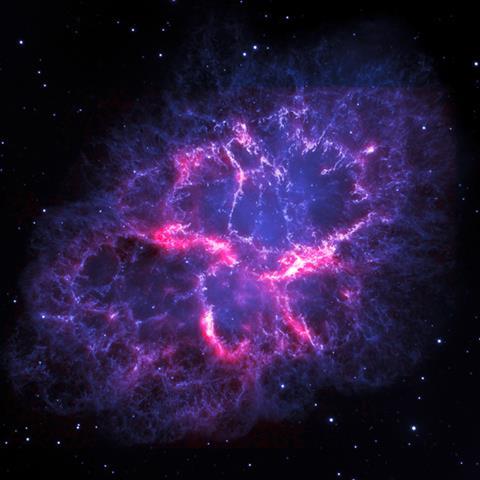 The Crab Nebula, a supernova remnant in the Milky Way. Supernovae could explain the abundance of fluorine in our galaxy

Astronomers based in the US may have uncovered one of the reasons why fluorine exists on Earth and throughout the Milky Way galaxy. Their observations suggest that neutrinos from exploding stars may stimulate fluorine production.

Built in the 1960s, the Kitt Peak observatory in Arizona has been behind some of the most important astronomical discoveries of the past 50 years, including the unveiling of dark matter and the first observable gravitational lens.

Catherine Pilachowski and her colleague Cameron Pace, both based at Indiana University, US, have now used Kitt Peak’s 2.1m telescope to capture the spectral signature of hydrogen fluoride in the Milky Way’s galactic disk – a starlit band that stretches across the night sky – and calculate the abundance of fluorine in evolving low mass stars. The researchers found the level of fluorine to be broadly constant across the thin disk. They argue that these levels are inconsistent with the idea that chemical evolution takes place solely within evolving stars. Although they state the primary source of fluorine in the galaxy is still open to interpretation, Pilachowski and Pace suggest the observations provide evidence that neutrino emission from supernovae may contribute to the galactic fluorine budget.