Researchers in the US have created a lithium-ion battery the size of a grain of sand, the first to be manufactured by 3D printing. Tiny batteries like this could be used to power miniature or flexible devices, and the team hope to combine them with other printed electronics.

With the invention of ever-smaller sensors, robots and medical devices, demand for micro-batteries is on the rise. Currently available micro-batteries contain electrodes made using ultra-thin conductive films, but their tiny size limits their power output and energy storage capabilities. Jennifer Lewis and her colleagues at Harvard University decided to approach the problem using a custom-built 3D printer, which can build up layers to create tightly interlocking electrodes within a millimetre square space.

‘The battery’s energy capacity depends on how much of its volume is actually filled with the active electrodes,’ explains Lewis, ‘so we used this stacked, interdigitated architecture to fill as much space as possible. We can print over much larger areas but working with this size was sort of a challenge to push the technology.’ 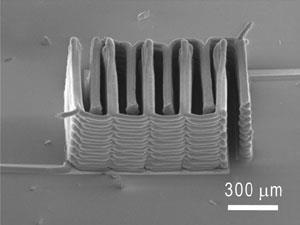 The electrodes are built up by squeezing out layers of conductive ink onto interlocked gold combs, much like piping icing onto a cake. Getting the ink right is crucial, says Lewis. It has to be electrically conductive, but soft enough to be squeezed out of the printer’s tiny nozzles, just 30µm in diameter, without clogging. The team achieved this by using fine nanoparticles of lithium titanate (for the anode) or lithium iron phosphate (for the cathode) dispersed through a viscous solution containing glycerol and cellulose derivatives.

Once the electrodes are printed out and dried, the cell is heated to harden the ink before being packaged into a plastic casing filled with electrolyte. The resulting battery works well, with a cycle life, charge rate and energy density comparable to commercial batteries and a power density of 2.7 mW cm– 2 that rivals other microbatteries.

‘3D printing is giving cutting-edge materials research a route to making actual devices and products,’ says Simon Leigh, a materials chemist working with 3D printers at the University of Warwick, UK. ‘This is a really nice demonstration of what can be achieved.’

But the microbattery is just the latest in a series of printed electronic components to come out of Lewis’s group, who eventually aim to print out complete devices. ‘Most of the 3D tools that have been developed today are for rapid prototyping, and that’s really just to show shapes,’ says Lewis. ‘We want to go beyond form and add function.’