Combining the features of two types of antimicrobial in a minimalist design has generated an efficient low-budget antibiotic.

Researchers in Israel have created miniature antimicrobial peptides that contain only four (as opposed to the usual 12-50) amino acid residues combined with a fatty acid.

Yechiel Shai’s team at the Weizmann Institute at Rehovot, Israel, created these ’ultrashort lipopeptides’ as a synthetic alternative to two groups of natural antimicrobials: the antimicrobial peptides (AMPs), which are typically made up of 12-50 amino acids and carry a net positive charge; and lipopeptides, which combine a lipophilic chain with a short anionic peptide of six or seven amino acid residues.

Exploring the minimal requirements needed to exhibit antimicrobial activity, the researchers were surprised to find that even peptides with only four amino acids, when combined with a fatty acid with a chain length of 12 to 16 carbon atoms, showed activity against bacteria and/or fungi. The peptide sequence lysine-glycine-glycine-D-lysine, with a hexadecanoic acid (16 carbon atoms) attached to the amino terminus, turned out to be the most potent compound. As the link between the lipophilic part and the peptide is just another peptide bond, say the researchers, the whole compound can be prepared on a commercial peptide synthesizer. 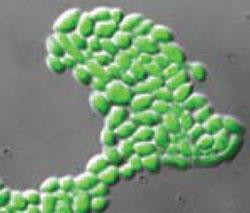 Despite the small size of these molecules, the team showed that they disrupt the cell membrane in similar ways as the larger lipopeptides and AMPs. For example, the uptake of a green fluorescent dye through the normally impermeable membrane is counted as evidence for membrane damage caused by the lipopeptides (see image above).

The researchers could vary the amino acids or the length of the lipid chain to fine-tune the specificity of the agents, opening up a range of potential applications. Some of the molecules are active against both bacteria and fungi, while others are specific to a smaller group of microorganisms.

The simplicity of the molecular architecture makes it easier to design molecules with specific functions, such as pH-dependent activity, a broad or narrow spectrum of activity or biodegradability, said team leader Shai. ’Overall, [the molecules’] simple composition and low production cost should allow their application for many purposes including therapeutics, material disinfection and food preservation,’ he said.

Michael Zasloff of Georgetown University, Washington, DC, a pioneer in the discovery of natural AMPs, sees promise in the new findings: ’Shai’s work extends our understanding of how to design inexpensive antimicrobial peptides. The challenge is to identify molecules of this class that have acceptable safety and anti-infective activity when administered to humans,’ he told Chemistry World.

Any colour so long as it’s green

New anti-microbial polymer coating can be applied from aqueous suspension.