Chemists have made the first hypervalent iodine compound containing both iodine(iii) and iodine(v). The new oxidant has proved effective in making 2-unsubstituted 2H-azirines from enamines, a synthesis not possible using existing hypervalent iodine reagents.

Preparing the new oxidant involved reacting o-nitroiodobenzene with m-chloroperoxybenzoic acid in acetic acid. Instead of the expected product, o -nitroiodoxybenzene, an orange solid formed. Single-crystal x-ray crystallography allowed the team to establish that the orange solid contained both iodine(iii) and iodine(v), making it the first mixed valence number hypervalent iodine compound. Interactions between the iodine atoms and electron-withdrawing nitro group at the ortho phenyl position appear to stabilise the structure. 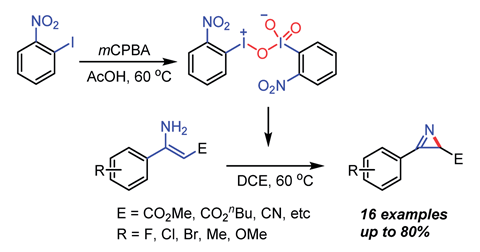 Traditional hypervalent iodine reagents cannot oxidise enamines to produce 2-unsubstituted 2H-azirines but the new mixed valence oxidant can and the team are optimistic it will have other applications.