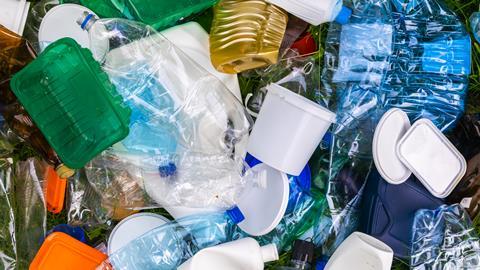 A new process converts mixed plastic waste into a single useful chemical feedstock. The procedure uses a combination of chemical and biological methods to upcycle three common plastics, and could offer a way to improve recycling processes by eliminating the need to first sort and separate different waste materials.

‘We wanted to develop processes that would enable the conversion of mixed plastic waste that’s quite heterogeneous,’ says Gregg Beckham from the National Renewable Energy Laboratory in Colorado, US. ‘The motivation, in that respect, was really to attempt to avoid the expensive and quite tedious sorting of mixed plastic waste. And in many cases plastic waste is actually physically bonded together – like in multiplayer packaging, or in textiles.’

Beckham’s team, which includes researchers from the Bottle research consortium, the University of Wisconsin, and the Massachusetts Institute of Technology, has now demonstrated a two-step process that first breaks down mixed plastic polymers with a catalytic autoxidation reaction and then feeds the oxygenated products to a genetically engineered bacterium. This funnels the various compounds produced during the first stage into one of two possible bioproducts.

The process uses polystyrene, high-density polyethylene and PET plastics as feedstocks, eventually converting them into either polyhydroxyalkanoates – a natural polyester – or β-ketoadipate, which can be used to make performance-enhanced nylons.

The first step is inspired by existing chemistry that is already used on megaton-scale in the petrochemicals industry, explains Wisconsin’s Shannon Stahl. ‘It’s very common to use oxidation in the chemical industry to create the building blocks that are incorporated into polyesters and other valuable materials,’ he says. ‘And of course, this process is borrowed directly from the mid-century Amoco process, which is used to take para-xylene and selectively oxidise it to [terephthalic acid].’

Using the cobalt–manganese–bromide catalytic system from the Amoco process with the plastic feedstocks breaks down the polymers and produces a mixture of carboxylic acids. These are then fed to an engineered soil bacterium for further refinement.

Around a decade ago, Beckham’s team proposed using this biological funnelling process for converting mixed oxygenated intermediates derived from lignin into a single product. Now they’re applying the same concept to compounds derived from plastic waste.

The biological step of the process relies on the Pseudomonas putida bacterium, which naturally consumes benzoic acid and alkyl dicarboxylates – the oxygenated breakdown products of polystyrene and HDPE. Beckham explains that a metabolic engineering approach allowed the researchers to expand the range of carbon sources consumed by the bacterium.

‘We had to engineer the organism to consume the breakdown products of PET, specifically terephthalic acid,’ he says. ‘So we took transporters and catabolic enzymes that convert terephthalic acid into the same intermediates that you can derive from polystyrene.’

Further metabolic engineering enabled the team to tune the chemical products generated by the bacteria to either of the desired β-ketoadipate or polyhydroxyalkanoate materials.

‘The study is one of the first to show how to get from a mixed waste stream to a pure product [and uses] a very interesting interdisciplinary approach,’ says Ina Vollmer, an expert on chemical recycling of plastic waste based at Utrecht University in the Netherlands. ‘Better recycling techniques for mixed plastic waste is particularly important as separating of [for example] multilayer materials will always remain a challenge.’

‘The first step of oxidative depolymerisation … is already very valuable to valorise pure polymer waste streams,’ she adds. ‘The [researchers] then go a step further to purify a mixed product stream from a combination of polymer types.’

Having demonstrated that their concept can work, the team now hopes to improve the process, including by expanding the range of polymer feedstocks that can be used.

‘We have tried this with other polymers and we haven’t found anything that doesn’t work yet,’ says Beckham. ‘But one of the key next steps from a process perspective is really thinking about what are industrially relevant feedstocks that are available at scale today – that can include things like textiles or reject plastics from a materials recovery facility, and things like this,’ he adds.