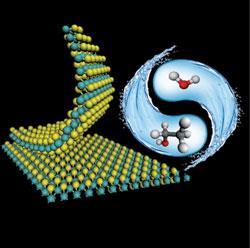 Inorganic graphene analogues (IGAs) were first discovered by physicists Andre Geim and Konstantin Novoselov of the University of Manchester, UK, in 2005, a year after the same pair discovered graphene. Like graphene, IGAs are single sheets of atoms, bonded in a ’chicken-wire’ hexagonal structure, with high mechanical strength and flexibility. But although IGAs are less stable at higher temperatures compared with graphene, they do have some particular advantages: for instance, they can act like doped semiconductors without actually adding any dopants.

Yet producing IGAs can be tricky. Some solvents can produce IGAs by exfoliation, but analysis has previously suggested such solvents need a high boiling point, making them difficult to remove at the end of synthesis.

Now, Hao-Li Zhang and colleagues at Lanzhou University have opened up a new avenue in IGA synthesis: mixing solvents to get the combined advantages of low boiling point and good exfoliation. They combined two solvents previously thought to be poor at exfoliation - water and ethanol.

To perform the exfoliation, the Lanzhou group add a powder of either molybdenum disulfide, tungsten sulfide or boron nitride to an ethanol-water mixture. They then sonicate the suspensions for eight hours, before centrifuging for 20 minutes. Finally, the researchers remove the exfoliated IGA from the thinner suspension left on top. ’As the number of possible solvent mixtures is virtually limitless, [our] mixed-solvent strategy effectively gives researchers great freedom to design ideal solvent systems for each specific application,’ says author Kai-Ge Zhou.

Angshuman Nag, an IGA expert at the University of Chicago, US, notes that the solubility of the IGAs used by Zhang and colleagues is quite low in the water-ethanol mix, between 0.02 and 0.08mg/ml. Really, he says, the solubility needs to be lifted to about 1mg/ml to allow the fabrication of continuous films. ’Real-world applications for IGAs will still take some more time,’ he adds. ’We need to improve both material design and device fabrication. It’s still at a premature stage.’