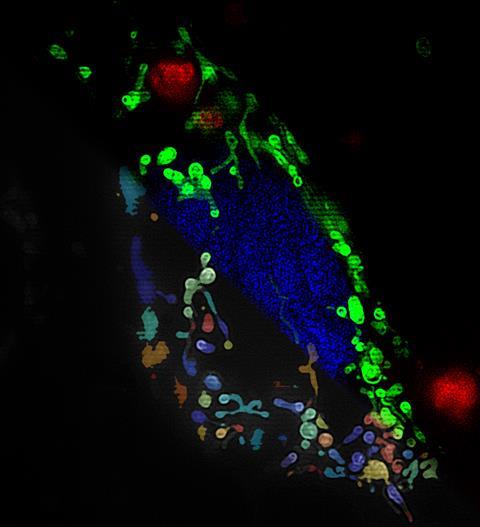 A metal-organic framework (MOF) has been created to effectively smuggle drugs into mitochondria, which are where cancers often begin. The researchers have also revealed the mechanism cells use to ‘swallow’ MOFs – an important first step towards developing more efficient drug delivery systems.1

Mitochondria – the organelles that power cells – often sit at the centre of changes that lead to a cell becoming cancerous. Malfunctions in mitochondrial biochemical pathways, such as the regulation of cell death or the elimination of reactive oxygen species, favour tumour growth. Moreover, most cancer cells produce energy using glycolysis rather than the usual production of ATP, suggesting a link between mitochondrial failure and cancer.2 As a result, these organelles have become a key target for cancer treatments.

‘This is the first example of targeted MOF delivery to mitochondria,’ explains David Fairén-Jiménez from the University of Cambridge, who led the study. ‘The chemical labelling we used is really specific.’ To achieve this, chemists decorated the MOF with triphenylphosphonium, a lipophilic cation widely used in chemical biology to direct drugs and chemical vessels to mitochondria.3 As a proof-of-concept, they loaded the MOF with dichloroacetate, an anticancer drug candidate currently undergoing clinical trials. Researchers found that this ‘Trojan horse’ can reduce the drug dose needed to kill cancer cells by two orders of magnitude, something that could diminish the side-effects of chemotherapy administered using this agent.

Susumu Kitagawa, a MOF researcher at Kyoto University, Japan, is impressed by this breakthrough. ‘It is very challenging to localise small molecules into subcellular organelles,’ he says. Thanks to MOFs, not only are they smuggled into mitochondria, but they also ‘kill cancer cells more efficiently than the drug alone’, adds Kitagawa.

Fairén-Jiménez and his team also investigated how the MOF gets into the cell, and then the mitochondria. ‘So far, nobody had studied this mechanism in detail,’ he says. To do this, the researchers loaded the MOF with the fluorescent molecule calcein to track the movement of the material using super-resolution microscopy and combined this with drugs that inhibit different endocytosis pathways. They found that the MOF enter the cells via receptor-mediated endocytosis. The team also analysed the cells’ RNA-coded messages – the transcriptome. These techniques revealed more activity in some biochemical pathways closely associated with cell death, as well as morphological changes to the organelle.

María Vallet-Regí, a mesoporous material drug delivery researcher at the Complutense University of Madrid, Spain, agrees that the results are quite promising. ‘The mitochondrial targeting is particularly interesting,’ she says. However, she believes that researchers have missed some key experiments to determine whether these drug-loaded MOFs could really treat cancer. ‘It’d be great to see in vivo studies that confirm the efficiency of these systems,’ she adds.

Toxicity is another key point to consider. Researchers have demonstrated that the different ‘ingredients’ – MOF, drug and label – are harmless to breast cancer cell lines when apart, but deadly together. ‘Now, they would need to prove that these materials don’t damage healthy cells,’ says Vallet-Regí. Ideally, the treatment must target cancer cells selectively. Vallet-Regí is also sceptical about the stability of this MOF in the body.

‘We are working towards addressing these issues,’ responds Fairén-Jiménez. ‘We have found that using polyethylene glycol to coat the metal-organic framework improves its stability,’ he adds. On top of that, Fairén-Jiménez sees a silver lining to the relative lack of stability of these materials, as ‘the body will be able to degrade and remove them, avoiding accumulation’.

Fairén-Jiménez points out that this paper ‘is just one piece in a jigsaw of work around the possibilities of MOFs for targeted drug delivery’. His group is currently expanding this research line, looking at a myriad of different MOFs, anticancer drugs and coatings. ‘MOFs have a very promising future in medicine, they will soon get past their fundamental phase towards real applications,’ Kitagawa says. ‘This is a very exciting steppingstone for us,’ adds Fairén-Jiménez. ‘We will shortly test our materials in vivo, and hopefully puzzle out an efficient cancer treatment.’