Scientists have used water to create almost frictionless lubricated surfaces, which stay slippery even under heavy loads. The coating they have developed could shed light on how natural joints are lubricated and provide new ways to protect hip and knee joint implants from friction damage.

Jacob Klein from the Weizmann Institute in Rehovot, Israel, and his group have made polymer ’brushes’ by attaching one end of polymer chains to a host surface, leaving the other end sticking out. The polymer chain ’bristles’ tend to repel each other and so stand up from the surface to form a brush-like structure. ’When two surfaces coated with polymer brushes compress against each other, they tend to squeeze within themselves rather than intermingling with each other,’ explains Klein. ’This allows them to be pressed together quite hard without entangling, so the friction between them is low.’ 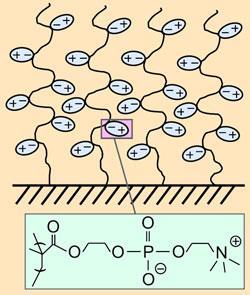 Klein’s brushes are made from poly[2-(methacryloyloxy)ethyl phosphorylcholine] (pMPC), which has side chains that are zwitterionic (i.e. they are neutral overall but carry both positively and negatively charged groups). ’By introducing charges to the brushes you get a hydration layer of water molecules around the charges,’ explains Klein. ’These water molecules are tightly bound, in the sense that it’s hard to remove them all at once, but individual molecules are able to rapidly exchange with water in the surrounding solvent or the hydration layer of another charge. This gives them the properties of molecular ball-bearings - you can press hard on them and they won’t release their water, but when you come to shear them [move the surfaces over each other] they behave in a fluid way, which gives the excellent lubrication properties.’

’What’s interesting about this work,’ says Nic Spencer, a surface chemist and tribologist from the Swiss Federal Institute of Technology (ETH) in Z?rich, ’is that you have a zwitterionic system, rather than either a neutral or a charged system, which is what people have looked at before, and it seems to behave in an unexpected way. It seems that holding water at the surface is one of the crucial issues with natural and brush- or gel-based lubrication, and it looks like [Klein] has come up with a way of doing that very effectively.’

One of the features that makes these new brushes so much more robust than those in previous studies is the fact that the polymer bristles are covalently attached to the host surface. This makes them much less likely to be ripped off when the surfaces move over each other, making them more resistant to stronger and repeated shearing movements. Klein’s brushes maintain extremely low friction coefficients at pressures of 7.5MPa, more than 20 times higher than previous studies, which he attributes to a combination of this strong attachment and the high level of hydration in the zwitterionic polymer bristles.

Klein thinks that the brushes could find applications in medical implants that need low-friction surfaces. One example might be molecular scaffold structures used to promote repair of the cartilage surfaces of knee or hip joints. ’Often when you put such a scaffold structure into lesions where the cartilage is worn away, because of the high pressure and friction, it can immediately rip away from the place where you want it’ he explains. ’Reducing friction on these scaffolds might allow more effective healing of the surfaces without having to put in a whole new joint.’ In cases where a joint replacement is necessary, low-friction coatings could play a big part in reducing friction and wear between the moving parts.

’It’s an interesting observation from the point of view of natural lubrication,’ Spencer adds. ’There are lots of zwitterions in nature, but there are also lots of systems that don’t have them and lubricate as well - it’s not universal, but it might contribute to our understanding of how natural lubrication systems work.’