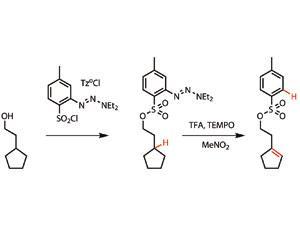 A reagent developed by US chemists can selectively introduce synthetically useful C=C double bonds into unactivated carbon chains, guided by an activating group attached to a nearby oxygen or nitrogen atom. Because of the enormous utility of alkenes, the method could open up new avenues in synthetic chemistry.

The work builds on the burgeoning field of C-H activation, which aims to streamline synthesis by stimulating reactions at C-H bonds directly, rather than having to pre-functionalise the substrate molecule. While a lot of progress has been made in C-H activation for coupling reactions and oxidation, producing alkenes has remained tricky. ‘The problem is that the alkene is way more reactive than the starting material towards oxidation,’ says Phil Baran from the Scripps Research Institute in La Jolla. That means finding reagents that will excise hydrogen from simple alkyl chains, but not carry on to oxidise the alkene is a tricky balance.

Baran’s group has packaged up some reasonably well known and powerful chemistry into a form that is friendly to synthesis. The reagent combines a toluene sulfonyl (tosyl) group, which most organic chemists are familiar with manipulating, with a triazene. This string of three nitrogen atoms can be carried through several chemical steps until it is required, at which point treating it with a strong acid, such as trifluoroacetic acid, generates a radical on the aryl ring. ‘I call it a “molecular cobra”,’ says Baran. ‘It can pass unnoticed through a few steps then, at a moment’s notice, it can reveal its venom in the form of an aryl radical.’

The aryl radical can then rip a hydrogen from a nearby carbon to leave behind a second radical, which is oxidised to a cation, followed by elimination of an adjacent hydrogen to make an alkene. Initially, the team assumed this would require a metal catalyst, but in the process of exploring the mechanism, they discovered the reaction worked even better with (2,2,6,6-tetramethylpiperidin-1-yl)oxyl (TEMPO), an organic radical oxidant, instead of the copper they had been using.

While Baran admits that the yields from the reaction are far from ideal and quite variable, he points out that there are very few alternative ways to achieve the same result. John Bercaw, an organic chemist at the California institute of Technology in Pasadena, US, agrees that having another option to call upon ‘will undoubtedly prove useful in retrosynthetic strategies’. However, he points out that to be useful in a more industrial setting will require development of a catalytic variant that uses a much less expensive oxidant.