Researchers have found a way to weave long-chain organic molecules into an interlacing pattern without irreversibly bonding them together. The resulting molecular ‘fabric’, which has unusual properties, could potentially lead to a variety of other materials with applications from porous crystals and polymer chemistry to information storage. 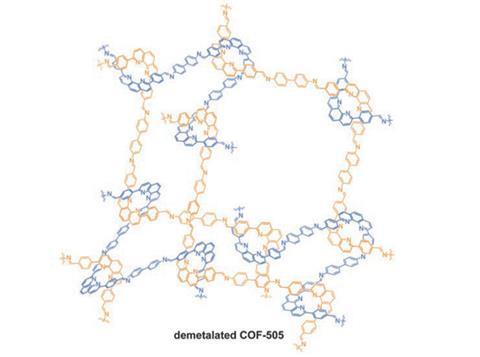 Fabrics made of woven fibres have found uses from clothing to ropes and carpets, because they are both strong and flexible. Chemists would like to be able to weave together molecular chains, but have ‘not really learned how to do this’, according to Omar Yaghi of the University of California, Berkeley, in the US, who led the team behind the research. In thermoplastic polymers, he explains, the chains lie approximately parallel, sliding past one another when the material deforms. Conversely, in molecular frameworks, the molecules are bonded at the crossing points, producing rigid, inflexible structures.

Yaghi and colleagues built an interwoven  covalent organic framework using the aldehyde-functionalised derivative of the complex salt Cu(i )-bis[4,4’-(1,10-phenanthroline-2,9-diyl)dibenzaldehyde]tetrafluoroborate – Cu(PDB)2(BF4) – in which the Cu+ ion forms four coordination bonds to the N atoms on each of the PDB chains, locking the aldehyde groups into an approximately tetrahedral arrangement. By adding benzidine (BZ), the researchers joined multiple salt molecules in a condensation reaction to produce long, imine-bonded PDB-BZ chains repeatedly interlaced around the Cu+ ions. The chains were held in position by the coordination bonds to the metal ions, making the structure relatively rigid. However, the metal ions could then be removed by heating the material with potassium cyanide in a solution of methanol and water, allowing the chains to slide past each other while remaining interlaced and making the material 10 times as elastic. The original properties could be recovered by simply stirring in a solution of Cu(CH3CN)4(BF4).

‘I view this weaving strategy as an additional level of sophistication in the precise design and making of new materials,’ says Yaghi. He now intends to explore the potential of weaving together other types of long-chain molecule, perhaps with multiple types of molecule woven within a single structure. Further into the future, he suggests more complex patterns could encode information, but he says there are immediate applications: ‘Taking all kinds of polymers that we see in everyday life and incorporating this weaving in their structure to add more robustness, dynamics and resilience.’

Jean-Pierre Sauvage of the University of Strasbourg in France, whose group developed the idea of templating around a metal ion, describes the work as ‘a great paper’. ‘The strategy is much related to what was done by my group in the past,’ he says, ‘but the fact that a material was obtained instead of a simple molecule adds a new and important dimension to the field.’ Tomislav Friscic of McGill University in Canada agrees: ‘The whole material design is just beautiful,’ he says, ‘I see absolutely no reason why this can’t be modifiable into different topologies, different dimensionalities and completely different chemistries.’