Researchers in the UK and Canada have identified for the first time some of the individual components of toxic naphthenic acid mixtures present in waste water from oil sands.

Oil sands are large natural deposits that contain sand, clay, water and bitumen - an extremely viscous form of petroleum. Separating the bitumen from the sand requires an extraction process that uses large amounts of water - between two and four barrels of water for each barrel of bitumen - producing large volumes of toxic waste water.

These latest findings could help understand the toxic naphthenic acid (NA) mixtures in that waste water. The findings boost the prospect of improving much sought after environmental monitoring programmes. 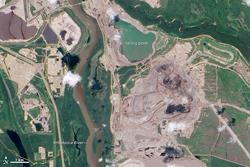 The Athabasca oil sands in the Canadian province of Alberta are the world’s largest oil sands and represent some 174 billion barrels of bitumen that can be turned into synthetic oil. The waste water generated is either recycled back into the processing or stored under a ’zero-discharge’ policy in large lagoons called tailings ponds.

’Identifying individual components within this mixture has proven quite difficult because of the similarities between structural conformations, as well as the sheer number of compounds contained within the acidic fraction of oil sands process-affected water,’ says Richard Frank at the Aquatic Ecosystems Protection Research Division of Environment Canada, Burlington, Ontario, who conducted the research with Steven Rowland’s lab at the University of Plymouth, UK.

Since toxic action is frequently determined by structure, identifying the NA structures in the OSPW is crucial. Not knowing the structures has made it difficult to monitor the potential leaching of NA from tailing ponds into surface waters. Furthermore, the oil sands are known to leak naturally into the environment, so there is a need to differentiate between industrial and natural contaminates.

’The advancement of naphthenic acid analysis presented in this study will allow for a better understanding of the complexity of this poorly understood mixture,’ says Frank.

Mark Barrow, who investigates petroleum-related and environmental samples at the University of Warwick, UK, says the work makes a valuable contribution to environmental monitoring of oil sands. ’Just as establishing the sizes and molecular formulas  of the organic acids has been vital, there is a need for greater insight into the structures of these compounds,’ says Barrow, ’the structures will be important in determining toxicity towards aquatic organisms.’