The central atom in an umbrella-shaped boron cluster can bond like a transition metal in two different ways, new research shows. It adds to boron’s propensity for forming unusual bonds, including other recent studies showing that it can bond with sodium and neon. 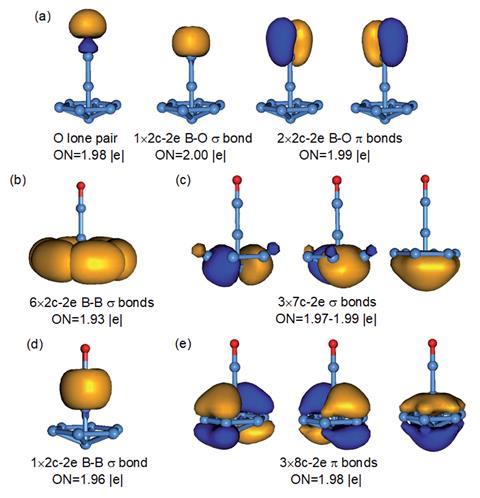 The partially filled d-shell of transition metal atoms mean they can bond to CO ligands, arguably one of their most defining bonding behaviours. Boron has shown similar metallomimetic properties due to its part-filled p-orbitals: a monovalent boron in a borylene dicarbonyl complex can co-ordinate two CO ligands via donor–acceptor bonds. However, another significant behaviour of transition metals is forming sandwich-type complexes with aromatic arene ligands. Now, a collaboration between researchers at Shanxi University, China, and Brown University, US, has discovered that the central boron atom in a boron-cluster boronyl complex can demonstrate both of these transition metal bonding behaviours.

The B9O- clusters were initially synthesised by laser vaporisation of a bismuth-based target with residual impurities acting as an oxygen source. The team used photoelectron spectroscopy to investigate the boron cluster and found two isomers contributed to the spectra. Intrigued by these results, they investigated the global minimum and discovered that the most stable isomer was an unusual umbrella-like structure. In this structure, a central boron atom forms a σ-bond with the boronyl ligand, but also demonstrates unexpected bonding to an aromatic h7-B7 ligand. To further corroborate the results, the team simulated spectra for the isomers, showing good agreement with their experimentally observed results.

While planar aromatic boron clusters can form half-sandwich complexes with transition metals, bonding to a boron atom is unprecedented. Here, the central boron atom forms a doubly aromatic B73- system by sharing its valence electrons with the aromatic ligand, making it unexpectedly stable.

Julia Stauber, an inorganic chemist at the University of California, Los Angeles, in the US comments that ‘the unusual structural and electronic properties of the [(h7-B7)-B-BO]– anion are certain to provide insight into new and exciting classes of metallomimetic boron clusters that have the potential to display reactivity and coordination properties that have perhaps only been realised in the context of transition metal chemistry.’