Research by scientists at the University of California Riverside, US, could pave the way for novel insect repellents to tackle the spread of deadly tropical diseases. Insects such as mosquitoes detect carbon dioxide in exhaled breath to track down their prey and Anandasankar Ray and his group have shown it’s possible to use odorant molecules to disrupt the insects’ carbon dioxide sensing machinery.

’We’d already shown volatile odorants can block the CO2 receptor in fruitflies. This receptor is well conserved across many insects and we thought the chemicals might also work in other insects,’ Ray says. 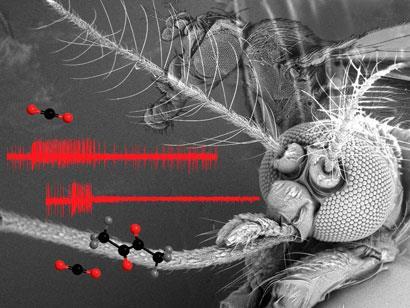 Head and olfactory organs of a female mosquito (in foreground) and a fruitfly (background). Sample electrical recordings from a carbon dioxide sensitive neuron are also shown along with the chemical structures of active compounds.

They studied three mosquito species that transmit malaria and dengue fever in the lab and in field trials in Kenya, and found three useful classes of volatile odorants.1 Chemicals like hexanal block the CO2 receptor; others, such as 2-butanone, mimic CO2’s activity, fooling insects into thinking CO2 is present. Ray is most excited about the third class - ultra-prolonged activators of the CO2 receptor, such as 2,3-butanedione. ’Even brief exposure can stimulate the sensory neuron so strongly it keeps firing for several minutes, preventing CO2 detection,’ he says.

Evaporating tiny quantities of an ultra-prolonged activator might provide widespread protection against mosquitoes by masking breathed out CO2. This has great potential in the developing world. ’One application could protect an entire hut,’ Ray says. They are now looking for odorants that are 10 to 100-fold more effective than those tested in the proof-of-principle study and have carried out a virtual screen of 500,000 compounds.

Currently, mosquito traps are either large and expensive or ineffective. CO2 mimics could lure mosquitoes into the traps without the need for CO2, making traps smaller and cheaper.

Ideally, he says, molecules already tested for safety in flavour & fragrance applications will prove effective and a spin-out company, OlFactor Laboratories, has been set up. ’Optimistically, we may have a prototype in a couple of years,’ he says. ’But the idea that odour molecules in very small quantities can have a dramatic effect on the behaviour of such dangerous insects is really attractive.’

In an accompanying commentary, Mark Stopfer of the US National Institute of Child Health and Human Development says the work bodes well in the hunt for new strategies to prevent mosquito-borne diseases.2 However, he cautions, it might not be that simple. ’Because mosquitoes are also attracted to other human body odours in sweat, breath and skin, it remains to be seen how effective these compounds will be for protecting people,’ he says.