Low cost gadget fine-tuned with the help of a smartphone 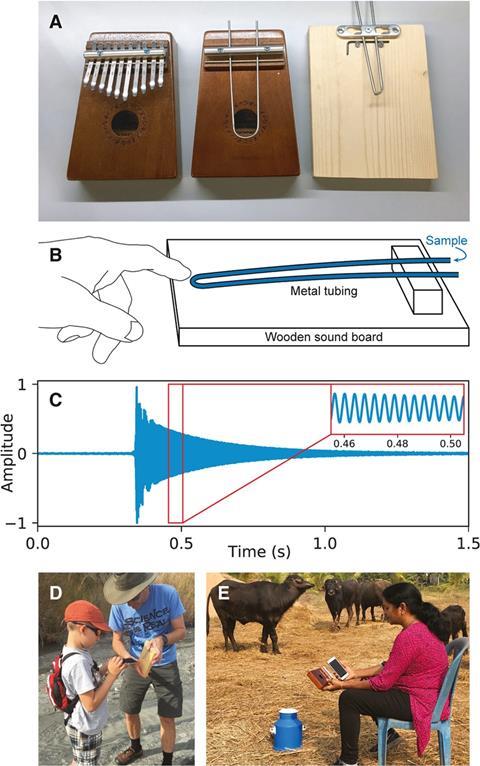 By modifying a musical instrument to contain a sample and analysing the instrument’s pitch, it is possible to make precision measurements of the physical properties of a sample. By combining it with a smartphone the mbira sensor was used to test river water in California (D) and bison milk in India (E)

Researchers have turned a simple musical instrument into a piece of analytical equipment that can measure the density of a liquid sample with the aid of a smartphone and specialised software.

The mbira – or thumb piano – consists of a wooden board to which metal rods of varying lengths are attached. To make sounds the metal rods are plucked. Researchers from the University of California, Riverside in the US led by William Grover showed that the mbira design could be modified to make a density sensor by replacing the metal rods with a hollow tube bent into a loop. Liquid samples can be loaded into the tube, and the frequency of the sound produced when the loop is plucked can be correlated to the density.

The researchers developed software to interpret the sound and give a readout of the density on a smartphone. They showed the mbira sensor could be used to tell the difference between glycerol and diethylene glycol, which is sometimes found in counterfeit drugs, as well as between different salt solutions. They say the technique can be used virtually anywhere, and the device itself is simple to construct.