A natural glue that sticks mussels to rocks and boat hulls has inspired US scientists to develop a new type of medical adhesive for use in pancreatic islet transplantation, an experimental medical procedure for treating patients with type 1 diabetes.

The glue, developed by Phillip Messersmith’s team at Northwestern University in Evanston, consists of a branched poly(ethylene glycol) core with catechol-derived end groups. Speaking at the Materials Research Society’s meeting in Boston last week, Messersmith explained that the catechol functional group plays a key role in the solidification and adhesive capabilities of the marine blue mussel Mytilus edulis’ adhesive proteins. ’Catechol in the presence of an oxidant transforms into a quinone that then reacts further, first to accomplish the solidification - the cross linking of the polymers - and then also at the interface to form covalent bonds with elements of the tissue.’

Islet transplantation is an experimental medical procedure involving infusing donor pancreatic cells through a catheter into a diabetes sufferer’s liver, where they become lodged in the blood vessels. Once immobilised the islets’ beta cells make and release insulin, allowing the patient to cease daily injections of the hormone. ’The problem [with the current procedure] is that the islets over a period of two or three years gradually become incapacitated,’ explains Messersmith. ’There is an interest in finding alternative locations within the body for transplanting islets.’ 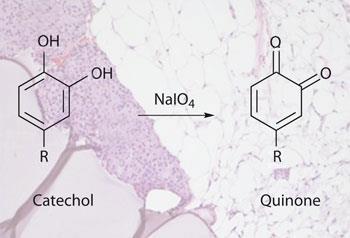 Catechol in the presence of an oxidant transforms into a quinone

A huge hurdle to be overcome here is ensuring the cells stay where they are put. ’There is a significant need for effective medical adhesives that function reliably on wet tissue surfaces with minimal inflammatory response,’ Messersmith says. A low

inflammatory response is vital, as it is the blood-mediated inflammatory reaction that occurs when the cells are implanted in the liver that is thought to be responsible for their demise. Existing medical superglues that are approved for external use wouldn’t be suitable in this environment, Messersmith says, as they elicit ’a fairly strong toxic response’. He does admit however that no comparison studies have been carried out yet.

On the operating table

The team’s simple procedure involves pipetting donor islets on to the tissue surface and then adding the adhesive, which solidifies in situ and bonds the islets to the tissue. The adhesive itself is applied using a two barrelled syringe with an attachment at the front where the polymer and oxidant - sodium periodate - are mixed just before application. ’Once the two components mix together you begin a chemical reaction where the periodate’s primary role is to induce the catechol oxidation to the quinone,’ Messersmith explains. The oxidation occurs less than a minute after mixing, he adds.

The glue has been tested in vivo in mice and shown to elicit minimal short or long term inflammatory response while successfully holding clusters of donor islets cells in place for up to a year. Importantly, the beta cells in these islets were also able to make and release insulin during this time scale.

So far the team have looked at fat tissue, the surface of the liver and the pancreas. ’There seems to be significant variability among tissues for this procedure and fat seems to be a good candidate at this point,’ says Messersmith. ’Next we plan to do further experiments in mice in other locations in the body.’