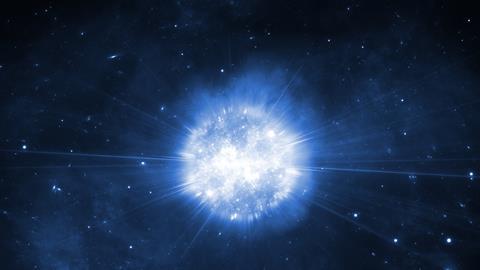 Hypernovae – a very rare type of supernova – produced most of the actinides in the universe, researchers claim. Their discovery challenges a study published just days earlier that had identified a neutron star collision near the early solar system as the source of its heavy elements.

US scientists released a study on 1 May describing their discovery of a violent stellar collision 4.7 billion years ago that they said created most of the curium and plutonium in the solar system. Their work contradicted previous research that had suggested radioactive heavy elements were produced by multiple supernovae.

Now a team led by Daniel Siegel from Columbia University, US, show that heavy elements were more likely produced by the explosive death of stars at least 40 times more massive than the sun.

Although these hypernovae are 10 times rarer than neutron star mergers, they produce 30 times more heavy elements in one go. For their calculations, the team looked at galactic abundances of europium relative to iron. Iron is the heaviest element that stars can produce by nuclear fusion; heavier ones are created by nucleosynthesis in events that release enormous amounts of neutrons. According to the researchers’ simulations, 80% of actinides were produced in such cosmic events.

A hypernovae might also be the reason the Reticulum II, a dwarf galaxy 97,000 light years from Earth, is unusually rich in gold and europium. The dwarf galaxy acquired its heavy elements shortly after it formed. The Columbia team notes, in favour of its theory, that it takes a very long time for two neutron stars to form and then collide, while hypernovae can occur a few million years after a galaxy’s birth.

Siegel and his colleagues think it has been difficult to observe heavy elements from hypernovae because they produce large quantities of nickel-56. The radioactive metal’s spectrum hides the weaker actinide signals. However, collecting near infrared emission data several days after the dying star’s initial explosion might contain heavy element signals, the researchers suggest.