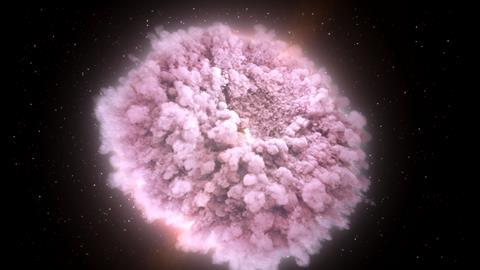 The collision of two giant dead stars 4.7 billion years ago created most of the curium and plutonium that has ever existed in the solar system. This new finding goes against previous studies that suggested that frequent supernovae have produced a constant stream of radioactive heavy elements.

Most elements are produced inside stars through nuclear fusion. But for elements heavier than iron, this process becomes inefficient, requiring more energy than it releases. ‘For the very heaviest elements, stars can’t produce those, so there had to be some other source,’ explains the lead researcher of the new study, Imre Bartos from the University of Florida, US. ‘For a long time, people thought these were supernova explosions.’

Supernovae release an enormous number of neutrons in a very short amount of time – perfect conditions for heavy element nucleosynthesis. They are also very common, occurring once every 30 years in our galaxy.

When neutron stars merge, they create an accreting black hole (the accretion disk is shown red). Tidal (dynamical) forces and winds from the accretion disk eject neutron-rich matter. This ejected matter (shown in grey) undergoes rapid neutron capture, producing heavy elements, including actinides. The ejecta reach the pre-solar nebula and inject the heavy elements that will remain in the solar system

Bartos and Szabolcs Marka from Columbia University, US, have now shown that it was more likely a different, much rarer event, that formed most of the actinides in the solar system: a violent collision of two neutron stars.

Neutron stars are the remnantsof giant stars. Their explosion and gravitational collapse compresses them to incredible densities – a matchbox-sized chunk from a neutron star would weigh around 3 billion tonnes. Neutron star collisions are only thought to occur once every million years in the Milky Way. The first was observed in 2017, and this demonstrated that they are indeed heavy element factories.

Bartos and Marka realised that the amounts of curium and plutonium found in meteorites matched a single neutron star collision better than constant production in supernovae. Although both isotopes have long since decayed – the elements are now regarded as artificial – traces of their existence can still be found frozen into asteroids’ crystal structure.

‘When I first read the study’s title, I thought “Wow, this is exactly what people need to do, use information from different, exciting fields”,’ says Maria Lugaro, an astrophysicist at the Hungarian Academy of Sciences. ‘They connect [the Laser Interferometer Gravitational-Wave Observatory] event rates and meteoritic data for actinide abundances in the early solar system.’

The researchers estimate that the cosmic collision happened 80 million years before the solar system’s birth and around 1000 light years away. Their calculations suggest this one event produced 70% of curium-247 and 40% of plutonium-244.

But Lugaro thinks more statistical analysis is needed. ‘There are quite big uncertainties in the plutonium-244 data in the meteorites,’ she says. ‘Also, we have no idea how things move around the interstellar medium, if things really mix and diffuse in the way it’s assumed in the model.’

Bartos now wants to look at other radioactive elements to further pin down when and where the neutron star collision occurred.