Danish researchers have made a nano-sized box out of DNA that can be locked or opened in response to ’keys’ made from short strands of DNA. By changing the nature or number of these keys, it should be possible to use the boxes as sensors, drug delivery systems or even molecular computers.

’But in this case you have things standing up,’ says Kjems. ’And this makes the structures more fragile and much harder to image, so just to prove that you actually have your structure can be quite difficult,’ he adds.

To make the box shape, the team took a long, circular single strand of DNA from a virus that infects bacteria called bacteriophage M13. This M13 sequence is a cheap source of single-stranded DNA and is convenient size for building with. To turn this ring of DNA into a box, the team used a computer to work out exactly the right combination of short strands of complementary DNA which could ’staple’ the appropriate areas of the ring together to get the desired box shape. When they mixed the M13 strand with the 220 short ’staple strands’ and heated them up for an hour, the boxes neatly self-assembled. 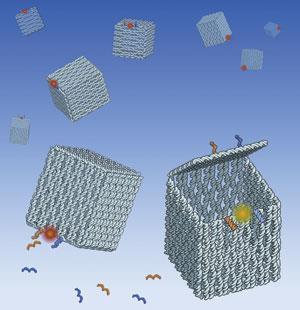 The blue and orange locking DNA strands on the box recognise the complementary key DNA strands, opening the box and switching fluorescent indicator from red to green

’Previously, people have used this method to make 3D structures like nanotubes,’ says Chengde Mao, from Purdue University, US. ’But it’s kind of arguable whether a nanotube is really a 3D structure. With this box, there is no question, so it really extends the DNA origami approach into three-dimensional structures.’

But a box isn’t much use unless you can put something in it, so the team also worked out a way of getting their box to open and close. By adding extra sections of DNA to the right staple strands, they formed ’locks’ on the rim of the box. Then, by adding the appropriate ’key’ DNA strands, they could spring the locks open and pop the lid. The team attached fluorescent molecules to the two parts of the lid, such that when the box was closed they got a red fluorescence signal, and when it opened it went green.

’In this case we used two different locks, so you need two different key molecules to open it,’ says Kjems. ’But in principle you could have up to eight locks, and we’re working on locks that respond to different things. This would allow you to make a box that could compute quite complicated logic functions - requiring just the right combination of up to eight signals to open.’ He adds that by putting the keys to one box inside another, it could be possible to imagine the beginnings of a DNA-based computer.

Thinking inside the box

Kjems reveals that the group have already had some success with putting cargo inside the boxes, including enzymes and quantum dots. ’It’s quite big (about 30nm) inside - it could fit virus particles or quite big enzymes and other macromolecules.’ In terms of applications, Kjems can foresee three main purposes for the box: ’One is as a calculator or logic gate; the second is for controlled release, for example of drugs, in response to external stimuli; and the last is as a sensor - where the thing you are sensing causes the box to open or close and give a readout.’

The DNA origami technique is quite straightforward, Mao comments, so could be applied to all sorts of similar structures. The fact that the box can be easily opened and closed also makes it ideal for moving guest molecules around. ’I’m really looking forward to seeing what the group do next,’ he adds.