Researchers have created nanoparticles that form clots within the blood vessels of tumours. They hope that with further improvements these could be used either to starve tumours or to target them with cytotoxic drugs.

A team led by Erkki Ruoslahti at the Burnham Institute for Medical Research, University of California at Santa Barbara, US, identified a simple linear peptide, consisting of only five amino acids (cysteine, arginine, glutamic acid, lysine, alanine), with a very strong affinity for tumour tissue, including blood vessels. The team coupled multiple copies of this peptide to nanoparticles that are already used in the clinic as MRI contrast agents - superparamagnetic, amino dextran-coated, iron oxide (SPIO) nanoparticles, which have diameters of around 50 nanometres. 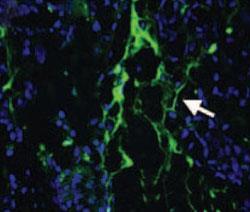 The researchers encountered a significant obstacle when they tested this construct in mice and discovered that most of the material is cleared via the liver rather than accumulating in tumours. As the peptide alone had not shown this problem, the researchers suspected that it was a property of the nanoparticles. So they introduced a pre-treatment with ’decoy-nanoparticles’ designed to saturate the uptake capacity of the liver before injecting the peptide-bearing particles.

With this precaution, the researchers managed to target the peptide nanoparticles specifically to the blood vessels of the tumours, where they aggregated in a way that resembled the aggregation of platelets during blood clotting. They found that the particles not only bound to target sites in the tumour, but also to each other, such that the presence of initial deposits helped to speed up the deposition of more material. Vittorio Cristini of the University of Texas at Houston welcomed the new development. ’This paper presents an interesting novel function for nanoparticles,’ he told Chemistry World, adding: ’It also demonstrates that a better, more quantitative understanding of mass transport in tumour microenvironments is necessary to improve diagnostics and therapeutics.’

There are two different ways in which the nanoparticles might help cancer therapy: by blocking the blood supply or by serving as drug transporters. Ruoslahti hopes that both effects will work together. ’The two approaches will be synergistic,’ he told Chemistry World.  ’As we increase tumour vessel obstruction, we also get more nanoparticles into the tumour, and that means being able to deliver a larger drug payload.’