Nano-objects under the light microscope

US scientists have developed a lens that can transmit images over long distances with a resolution that is not restricted by light wavelength.

US scientists have developed a lens that can transmit images over long distances with a resolution that is not restricted by light wavelength.

Xiang Zhang and colleagues at the University of California at Berkeley say they have got round this limitation with their new far-field superlens (FSL).

Light waves diffract in two portions: far-field light, which propagates away from the illuminated object and can be refocused by conventional lenses; and near-field light, which remains localized very close to its surface and picks out finer details. The near-field portion decays quickly as a function of the distance from the object, making it inaccessible to conventional lenses. The waves existing in the near field of an optical device are called evanescent waves. A superlens is able to collect these evanescent waves in the proximity of the object before they decay. 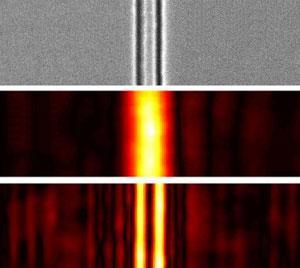 The idea of a lens that can beat the diffraction limit - and therefore image nanostructures that can’t be resolved using visible light - was first proposed by John Pendry at Imperial College London, UK. His theory was based on the fact that when electromagnetic radiation reaches the surface of a so-called ’perfect lens’, evanescent waves that exist in the near field can be captured and enhanced.

Zhang’s group developed a superlens in 2005, but it was only capable of projecting an image in the near field so that the sensor used to capture the image had to be placed within nanometres of the lens1. This limited its applications considerably. The new FSL can transmit high-resolution images over much longer distances by converting evanescent waves into propagating waves. The researchers have achieved this improvement by introducing carefully designed corrugations to the surface of the superlens.

’In 2005, our experiment confirmed Pendry’s theory,’ Zhang told Chemistry World, ’and now we have gone a step further, designing a device with potential practical applications.’ Zhaowei Liu, one of Zhang’s co-workers and lead author of their latest paper published in Nano Letters2, added: ’The new FSL brings the high-resolution image from the near field to the far field so that it can be seen using a regular microscope or a camera.’

According to Zhang, the detector can now be positioned up to a foot away from the object. However, he added, ’there are still a few issues that need to be improved. The major one is that the object and the lens still have to be placed very close to each other.’

Another successful, and considerably more developed, sub-wavelength imaging technique is stimulated emission depletion (Sted) microscopy, developed in Germany. There seem to be two practical advantages of FSL over Sted, according to the US team. First, FSL projects an image frame-by-frame whereas Sted forms its image using a scanning scheme (which is more time-consuming). Second, Sted requires fluorescent dyes and high illumination intensities to achieve the necessary nonlinear response, a limitation that does not exist with FSL.

The new lens is widely applauded. Luis Mart?n-Moreno from the University of Zaragoza, Spain, hailed it as a very important development, ’which will undoubtedly result in applications in any field requiring high-resolution optical imaging.’ Likewise, Viktor Podolskiy from Oregon State University, US, said that the technique ’eliminates the need for sample scanning and allows a direct transfer of information from the near field to the far field. It represents a breakthrough in optical imaging, with potential applications in areas such as bioimaging and nanophotonics.’

Adding a note of caution, Richard Blaikie, at the University of Canterbury, New Zealand, told Chemistry World that the work ’represents an important incremental advance on prior art and it will be interesting to see how the technique performs for a wide range of objects . the limitations of the technique for real-world objects will take some time and effort to overcome.’