Chemists in South Korea have created hollow molecular spheres by polymerising a simple, flat building block without the help of any scaffolding or template to create the three-dimensional shape.

Kimoon Kim and colleagues at Pohang University of Science & Technology

used a hollow building block called a cucurbituril. These take the form of molecular ribbons rolled up into cylinders. Cucurbitils were named after the plant family to which pumpkins belong, because of their hollow shape. They have served as hosts in supramolecular chemistry, accommodating guest molecules such as spermine.

Kim’s team polymerised these hollow cylinders into higher order structures. They modified them with 12 allyl (-CH2-CH=CH2) groups pointing radially outwards. By adding a dithiol linker and irradiating the mixture with UV light, the researchers triggered a polymerization reaction which made the rings line up in a plane. Surprisingly, however, this plane showed a tendency to curve up and ended up forming discrete particles which turned out to be hollow capsules with diameters over 100 nm and an average wall thickness of only 2.1 nm.1 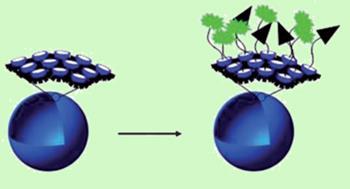 Analysing the energetics of the process, the researchers found that - starting from a spontaneous curvature arising from thermal fluctuation - energy and entropy compete to determine the size of the spheres. The result is that for each set of physical and chemical conditions, a normal, bell-shaped curve distribution of sphere sizes is obtained.

The Korean team also demonstrated that the polymerised nanocapsules can accommodate guest molecules such as carboxyfluorescein and that they can carry surface modifications which could direct them towards specific biological targets. The combination of these two useful properties, the authors say, makes their nanocapsules ’potentially useful in many applications including targeted delivery and imaging.’

Achim M?ller from the University of Bielefeld, Germany, who has created similar shapes based on inorganic chemistry,2 welcomed the new addition to the field. The noncovalent surface modification of the Korean capsules is particularly interesting, M?ller told Chemistry World. ’Although many types of nanocapsules are known,’ he said, ’nearly nothing is known about those which can interact specifically with their environment.’