A step towards biochemical detectors for monitoring environmental conditions and, ultimately, synthetic materials that grow and repair themselves like plants 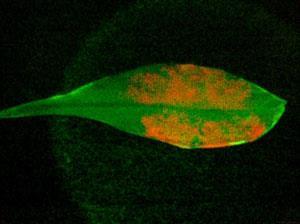 A leaf infiltrated with carbon nanotubes (shown in orange)

Synthetic nanoparticles can boost photosynthesis in plants and enable them to spot pollutants, according to a team of researchers in the US.

Previous research that added nanomaterials to plants had focused on the uptake of nanoparticles through plant cell walls and membranes, and their absorption, transport and distribution. But this latest study takes a nanobionic approach and could transform plants into a non-conventional technology, says Juan Pablo Giraldo who performed the work in Michael Strano’s group at the Massachusetts Institute of Technology (MIT).

To create the nanobionic plants, the team extracted chloroplasts – tiny structures in plant cells that are home to the photosynthetic system – from Arabidopsis, a flowering plant that is commonly used by biologists as a model organism. They put the chloroplasts into a buffer solution and added polymer-coated nanoparticles containing ceria (CeO2).

Ceria nanoparticles are potent scavengers of damaging oxygen radicals such as superoxide and hydrogen peroxide. Radicals can change the structure of molecules in the photosynthetic machinery, disabling its ability to function.

The researchers labelled the nanoceria particles with fluorescent dyes. Imaging the solution with both confocal fluorescence and transmission electron microscopes revealed that the nanoceria spontaneously penetrate the chloroplast outer envelopes, accumulating at sites where photosynthesis takes place.

During the process, oxygen radical levels in the chloroplasts dropped significantly. The team think it could be due to the nanoparticles enhancing the conversion of light energy into electron flow. 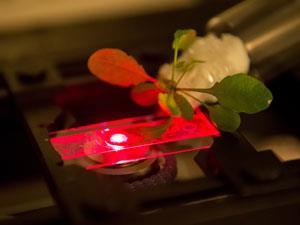 This plant, with carbon nanotubes inside its leaves, could detect nitric oxide

Next, carbon nanotubes were pushed through the epidermis of living Arabidopsis leaves with a syringe. The nanotubes’ further movement was observed with near-infrared fluorescence detectors. ‘We think the nanoparticles are moving through the pores that allow plants to exchange carbon dioxide and water vapour with the atmosphere, called stomata,’ says Giraldo.

Once infiltrated by carbon nanotubes, the plants were tested as chemical sensors. ‘We added nitric oxide to the surface of the leaf, and noticed that the level of fluorescence inside the leaves decreased dramatically.

The ability to embed nanosensors into plant tissue and the power to detect very small signalling molecules like nitric oxide, which is also an environmental pollutant, with these nanosensors are the two main breakthroughs of the paper, says Markita Landry, part of the MIT team.

The next step is to understand how the carbon nanotubes capture and transfer solar energy to the chloroplast, and to assess whether the nanoparticles can also boost the production of chemical fuels such as glucose. ‘It would take our technology to a new level of application such as enhancing crop and algae productivity,’ says Giraldo.

James Collins, director of the Center of Synthetic Biology at Boston University, US, who was not involved in the study, calls the research ‘a marvellous demonstration of how nanotechnology can be coupled with synthetic biology to modify and enhance the function of living organisms.’

But not everyone is convinced. James Barber at Imperial College London, in the UK, says the claims of a three-fold increase in photosynthetic activity are exaggerated.

Biochemist Barry Bruce of the University of Tennessee in Knoxville, US, warns against the use of such technology: ‘The increased use of nanoparticles in many consumer products has already raised concerns about their effect in the environment and on human health. This study claims that certain nanomaterials have the ability to augment natural plant-based photosynthesis. So this work is also possibly alarming.’