US scientists have shed light on how nanocrystals grow, providing information that could help improve fuel cells of the future

Research by US scientists has shed light on precisely how nanocrystals grow, providing key information that could help improve fuel cells of the future.

The team, led by Ulrich Dahmen of Lawrence Berkeley National Laboratory and Paul Alivisatos of the University of California, Berkeley, studied the behaviour of single platinum nanoparticles in solution.

They used transmission electron microscopy (TEM) with a liquid cell, which allows liquids to be observed inside a vacuum. This spin on the well-known TEM technique was first reported in 2003, but this is the first time it has been used to study the growth mechanism of single nanocrystals.

’Understanding of nanocrystal growth mechanisms is essential for the synthesis of nanocrystals with desired physical properties,’ say the team. It is almost impossible to make uniform nanoparticles, which means it is important to study one particle at a time to get a real understanding of their behaviour, rather than relying on an average.

The traditional model for nanocrystal growth is that metal-containing monomers bump into and join with the crystals as they move around in the solution. Recent studies, however, have suggested that nanocrystals merging together also play an important role. Using TEM, the researchers were able to ’watch’ both of these mechanisms occurring. ’Through the combination of these two processes, an initially broad size distribution can spontaneously narrow into a nearly monodisperse distribution,’ the researchers say. 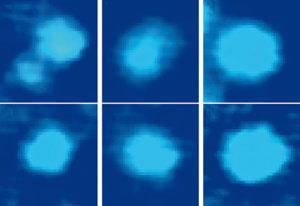 Christopher Murray, an expert in inorganic materials from the University of Pennsylvania in the US, describes this research as inspiring: ’For the first time they have brought together cutting edge advances in in situ microscopy - that allow imaging in liquids - and matched that with some important questions about the growth of nanoscale materials in liquids.’

’The choice of platinum as a study system is very good as it is an extremely important catalyst, in today’s fuel cells for example,’ says Murray. ’Understanding how to optimally grow platinum nanocrystals with optimum facets to an optimum size in future could translate into real world gains in the catalytic efficiency of fuel cells.’