Researchers in the US have created the first semiconductor nanocrystals that do not intermittently ’blink’ while emitting light. The breakthrough, which the researchers believe to be a result of a smooth transition in composition, may give way to a new breed of nanocrystals for applications ranging from biological imaging to low-threshold lasers. 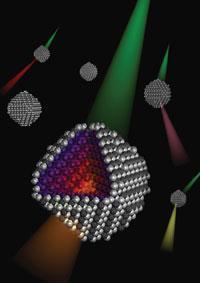 Semiconductor nanocrystals are potentially attractive because their optical and electronic properties are strongly related to their size. So to change the emitted colour from blue to red, for example, a nanocrystal would only have to be grown several times larger. This is, however, impossible for more conventional semiconductors like gallium arsenide, because they would have to be so heavily doped they would no longer be a pure material.

The problem with nanocrystals, however, is that their light emission tends to dim or ’blink’ intermittently during operation. Scientists think this might happen because the nanocrystals become charged, perhaps through certain free charge carriers (electrons) becoming stuck in defect sites, which essentially ’removes’ them from the crystal. Once in these localised defect sites, the electrons are able to steal energy from photoexcited electron-hole pairs that would normally generate light, stopping the light being emitted.

Todd Krauss of the University of Rochester and colleagues now seem to have solved this problem with a nanocrystal that has a smooth, rather than abrupt, graduation between its core and shell materials. The researchers add a zinc-selenium shell to a cadmium-selenium core, and anneal the structure for several minutes so that the zinc gradually diffuses inwards. Then they cap it with another pure shell of zinc-selenium.

In tests, single CdZnSe nanocrystals exhibited photoluminescence continuously for periods ranging from milliseconds to hours, whereas typical cadmium-selenium/zinc-sulphide nanocrystals - those with an abrupt core-to-shell transition - intermittently switched on and off. Krauss’s group think the smooth transition prevents charges from acquiring the energy of electron-hole pairs, so that they can almost always emit light.

’The ability of the extra charge to acquire the energy of a photoexcited electron-hole pair depends on several factors, such as conservation of energy and momentum,’ Krauss explains. ’In typical nanocrystals with very abrupt interfaces between core and shell materials the conditions are ripe for this non-radiative process to happen. However, in our nanocrystals that have smooth interfaces the physical processes that operate to give that extra charge the electron-hole pair energy are severely weakened.’

David Nesbitt, a researcher at the JILA/NIST Quantum Physics Division at the University of Colorado at Boulder, sees blinking as an ’unfortunate glitch’ in a ’promising class of materials’, and praises the work of Krauss’s group. ’This gradual core/shell architecture, for which the data suggest charging occurs without strong non-radiative quenching of the emission, may well have provided an elegant way around this problem,’ he says. ’It may be a case of the nano community getting to have their cake and eat it too.’