The gecko’s ability to walk up vertical walls could soon be copied by humans, thanks to new adhesive materials based on the structures found in its feet.

One group of researchers has developed biodegradable tape for medical applications, while another has produced high-strength binding which might one day help rock climbers. 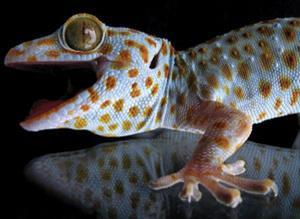 Scientists have tried to develop various materials that mimic the gecko’s remarkable stickiness since Kellar Autumn, of the Lewis & Clark College in Portland, Oregon, and colleagues showed in 2002 that van der Waals interactions between the millions of nanofibres (known as setae) in the animal’s toes, and the substrate, were behind its climbing ability.1 This finding implied that the adhesion properties depend only on the size and shape of the setae, and not on any aspect of the surface chemistry.

Novel adhesives based on the ’gecko principle’ followed thick and fast, but none fulfilled all of the seven criteria that Kellar listed for true gecko-like adhesion. Now, a group led by Ron Fearing at the University of California, Berkeley, has presented a strong, gecko-inspired adhesive tape that fulfils five of these criteria2, 3 - all except the ability to self-clean, and an interaction that is independent of surface roughness.

Fearing was part of the team who made the original discovery of the importance of van der Waals forces. His gecko-inspired synthetic adhesive (GSA) tape is based on hard plastic microfibres. Unlike conventional adhesive tapes, the GSA does not stick when pressed against a surface. Instead, it requires a small sliding movement alongside the substrate in order to get to grips with it, because the attachment of the microfibres is increased by shear forces.

Sliding movements create a shear force, which in turn increases the contact surface. By contrast, if the shear force is removed, the film can be lifted off the surface effortlessly. This is why a gecko walking up a wall can easily lift off the foot that half a second earlier pulled up its weight.

The prototype GSA tape developed by Fearing’s group contains 42 million plastic microfibres per square centimetre. Each fibre measures 20 micrometres in length and 0.6 micrometres in diameter. A patch of 2cm by 2cm stuck to a vertical glass plate can carry up to 400 grams of weight.

’This is a major milestone in the new field of gecko-inspired adhesives,’ said Autumn, who is not involved in the new work. ’Fearing’s adhesive is made from a plastic that is very hard - like real gecko protein - so it is not "sticky" to the touch. Also, Fearing’s microfibre arrays are sticky only when they slide across a surface, just like what we found in real gecko foot hairs. This could be the first real gecko tape." Fearing’s heavy-duty GSA tape might conceivably lead to applications such as safety equipment for rock climbers. 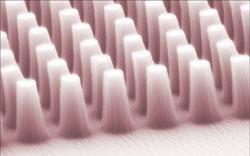 Meanwhile, the research teams of Robert Langer at the Massachusetts Institute of technology, and Jeffrey Karp at Harvard University, both in Cambridge, US, have developed another type of gecko-inspired sticky tape which they hope will become useful in surgical applications.4

These researchers shaped a biodegradable elastomer, poly(glycerol-co-sebacate acrylate), into conical nanopillars, and systematically varied the geometric parameters of these shapes to optimise adhesion to tissues such as pig guts. They hope to develop this approach into new materials for sealing wounds and to replace surgical sutures and staples.

Ron Fearing welcomed the growth of the field towards different applications. ’We are seeing a fascinating divergence of uses for nanofibres in contact,’ he told Chemistry World. ’While adhesive behaviour such as directionality and easy release is more gecko-like, this research shows that nanofibres can also be used to enhance permanent adhesion to tissue.’